The second practice session was shortened to 30 minutes after a 50-minute delay for a track inspection that revealed the screws built into the kerbs at Turn 6 and 16 had loosened.

Autosport understands the loose kerb screws were not the cause of the punctures and instead it was "foreign objects".

Regardless of the shortened session, the opening practice benchmark of 1m27.635s set by Audi's Duval was quickly cleared inside the first five minutes.

Wittmann eventually bettered the leading time to 1m26.687s as he made the most of cooler conditions on Friday evening.

Audi's Robin Frijns was second in the evening's practice session and narrowly edged out championship leader Philipp Eng, who was warned for track limits on several occasions. 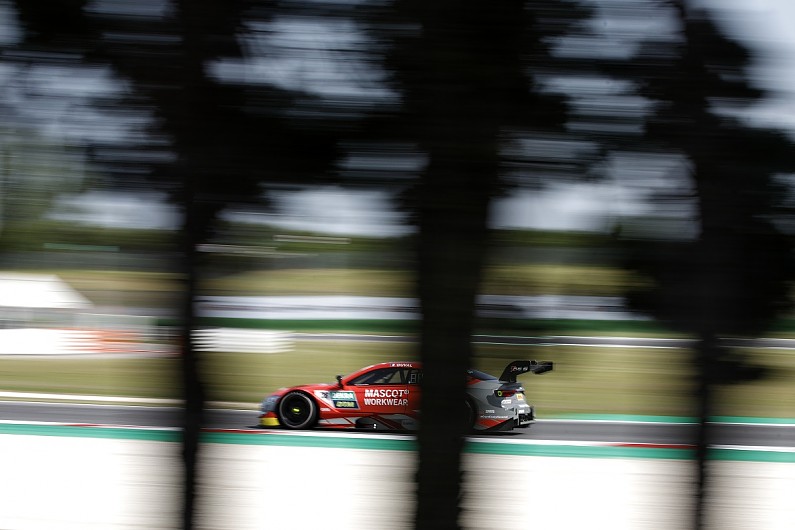 Rene Rast was fourth for Audi and led stablemates Nico Muller and Mike Rockenfeller on the timesheets.

BMW rookie Sheldon van der Linde was seventh ahead of fellow newcomer Aberdein, who placed his WRT-run Audi in fourth in the first session.

Duval and Bruno Spengler rounded out the second session's top 10.

Pietro Fittipaldi, who is replacing Jamie Green for this weekend, was 13th in the evening after finishing 11 in the opening session.

Ducati MotoGP rider Dovizioso finished 16th in both sessions after highlighting what he believed to be his weaknesses ahead of running.

In the first session, he finished only ahead of R-Motorsport Aston Martin driver Jake Dennis, but Dovizioso improved to outpace the two Astons of Ferdinand Habsburg and Daniel Juncadella.

Habsburg completed just one lap in the opening and was not classified, with R-Motorsport yet to reveal the cause, but the DTM newcomer managed 19 more laps in the later running.