BMW's Marco Wittmann won the DTM season opener at Hockenheim in heavy rain, pressured by Audis all the way as the new turbocharged era of the kicked off.

Two-time DTM champion Wittmann easily got the jump from pole at the start of the race, as the cars on the even-numbered side of the grid on the inside found conditions much slippier than those on the outside.

That also allowed Robin Frijns to spear his Audi into second place from a starting position of fifth, bur Frijns had no answer to the early pace of Wittmann.

On the fourth lap, Frijns ran wide at the Spitzkehre hairpin, allowing Audi stablemate Mike Rockenfeller up into second, and Rockenfeller chipped away at Wittmann's advantage, getting as close as 1 second.

But Rene Rast, who had tipped Timo Glock into a spin at Turn 1 on the opening lap, was on a charge in his Audi, and on the 13th lap of the 34-lap race Rockenfeller allowed Rast to make an easy pass into second on the approach to Spitzkehre.

Over the next 15 laps Rast would occasionally close to 0.5s off the back of Wittmann, but the leading BMW always appeared to have a little to spare and Rast never got into position to make a proper passing move.

Then, with five laps remaining, Rast's bid to make it seven DTM wins on the trot - after sweeping the final six of 2018 - came to a halt when he parked his Audi with a gearbox problem after the Sachskurve.

Wittmann made his mandatory pitstop with three laps to go, and took the flag 13.7s clear of Rockenfeller. 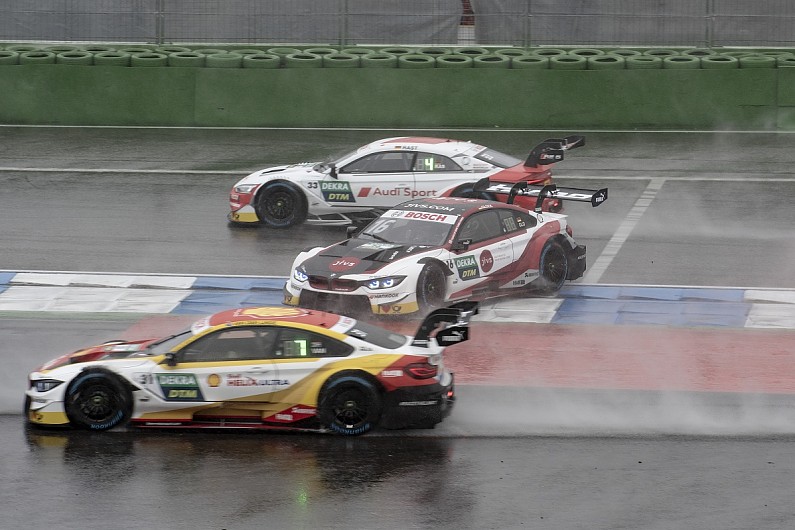 Glock charged up the order following his Rast-assisted Turn 1 spin (pictured above) - for which the stewards elected not to dish out any penalties for - so that with Rast's retirement his BMW was assured of a top-four position.

He emerged from his late stop a net third, but couldn't hold off Frijns, who was up to speed after pitting a lap earlier, meaning the Audi driver swept past into Turn 2.

Loic Duval survived a flirtation with the gravel trap at Sachskurve to take fifth in his Audi from the BMW of Sheldon van der Linde, who was the top DTM debutant at the finish.

Bruno Spengler was seventh in his BMW from the Audi of Nico Muller.

Aston Martin scored its first points in the DTM thanks to Daniel Juncadella's ninth place.

Juncadella pitted his R-Motorsport-run Vantage on the opening lap, so had a clear track for much of the race and netted the rewards at the end.

Paul di Resta ran in the top five in his Aston in the early stages before dropping to the tail end of the top 10, and then retiring to the pits with an apparent brake issue.

Pietro Fittipaldi claimed the final point in his privateer WRT-run Audi - team-mate Jonathan Aberdein was comfortably ahead of Fittipaldi before his stop, but a switch to slicks proved costly and doomed Aberdein to the tail of the field.