The early laps of the season offered no hint at the Mercedes dominance that was to come. The A4 of Martin Tomczyk stormed into a comfortable lead ahead of pole-sitter Gary Paffett, until a spectacular left rear puncture at the first corner forced the German out of contention on lap 11.

Paffett's day got even easier when it transpired that Audi had called Mattias Ekstrom in one lap before the pit window had opened. From there, the Briton was able cruise home as more tyre woes for the Audis left Mercedes to take a top four lockout.

Mercedes still has no idea what it did wrong in Spain. A change in track conditions shortly before the race caught its teams out out, and all of its cars struggled. Mattias Ekstrom won the race from pole, but an Audi podium lockout fell apart as there was misfortune for two of his team-mates.

Tomczyk had been the star of the race going from ninth to second with an alternative pit strategy, but he was excluded because one of the tyres fitted to his car at his final stop was not from his allocation.

Oliver Jarvis was on course for his first podium in a 2009-spec car until a fuel pump failure forced him out late in the race. Neither he nor Tomczyk's seasons would ever recover.

Paul di Resta's face couldn't hide his fury on the podium. The Scot had been cruising out front, until Mercedes told him to ease off once his lead over Bruno Spengler was around three seconds.

The team then cost di Resta just over three seconds with a fluffed pitstop, handing Spengler a first win for two years and the championship lead. It was a crucial points swing in favour of the Canadian.

Jamie Green won this race for the third year in succession. Even more remarkable was the fact that he'd used the same 2008-spec chassis for all three victories.

Green took the lead once pole-sitter Ralf Schumacher (yes, really) was penalised for jumping the start. The Briton was comfortable for much of the race, before the Audi of Ekstrom closed in during the final stint.

Spengler increased his points lead with third, as Paffett could only manage sixth and di Resta was fired off at the start by Alexandre Premat.

Ekstrom took pole for Audi, but he was seventh by the time the cars left Turn 1 on the opening lap. It summed up yet another race where Mercedes was in total control.

Spengler took another win, but behind him di Resta had settled for a safe second despite having the pace to win. The Canadian's points lead was up to 16 (over Green's 2008 car), but the tide was about to turn. The question was, could di Resta or Paffett make up 17 points in the remaining six races?

Paffett and di Resta were clear to take a comfortable 1-2 once Timo Scheider had stalled his Audi from pole position. The German's recovery to third was very impressive, but another win had slipped through Ingolstadt's fingers.

Spengler had his worst race of the season (so far), as he spent his day mired in the midfield. After some rather brutal treatment of Mike Rockenfeller's Audi, the Canadian came home seventh.

This was the most dominant performance of the year from a single driver. Di Resta was untouchable all weekend, and the way he shot off into the distance in the opening stint was phenomenal.

Spengler was happy to settle for second, and at this stage it looked like he was prepared to keep following di Resta home to minimise the damage in the points race.

This was another difficult race for Paffett, who struggled with balance issues too often during the middle of the season. The championship was heading towards a two-way fight, with the 2005 champ waiting in the wings.

It turned out to be another dominant win for di Resta, but it was yet another missed opportunity for Audi. The Scot had to up his game during the pitstop phase as Scheider came into play. Just as it looked like the reigning champ would be in a position to steal the lead after his stop, he suffered a puncture.

Di Resta stroked it home from there, but Spengler got the job done again and took another second place. With the gap down to seven points, he knew could afford to finish second to di Resta in the three remaining races and still take the title.

So much for Spengler's softly softly approach. The championship leader got caught out in changeable conditions in qualifying, and then decided to make up all of the ground from 10th place on the first lap with a lunge at the end of the backstraight.

Chaos followed, and Spengler was out when his suspension started to give way after 20 laps. Up front, di Resta worked his way up to second during the first round of stops, then jumped pole-sitter Scheider at the second stops to take his third win in a row and steal the points lead.

Rain had led to Spengler's downfall in Germany, and this time it was di Resta at the mercy of the conditions. The Scot was tagged on the first lap as Mike Rockenfeller ran into him while trying to defend his own position from Oliver Jarvis.

Spengler battled it out with Paffett at the front, as the Briton tried to keep his title hopes alive. He got the better of the Canadian during the stops, but a spin for Paffett mid-race aided the rise of Scheider from 15th all the way to an unlikely victory. It was only Audi's second of the season.

Controversy over the state and safety standards of the street circuit dominated the build up to the race. Among the mayhem, Spengler crashed in practice and again in qualifying, leaving him at the back of the grid while his title rivals di Resta and Paffett shared the front row.

Spengler tried, without success, to prevent the race counting for points. That left the Brits to fight things out at the front. Di Resta led the early stages, but he was happy to follow Paffett home in the end, as it meant both leap-frogged Spengler in the standings, with di Resta as the champion. 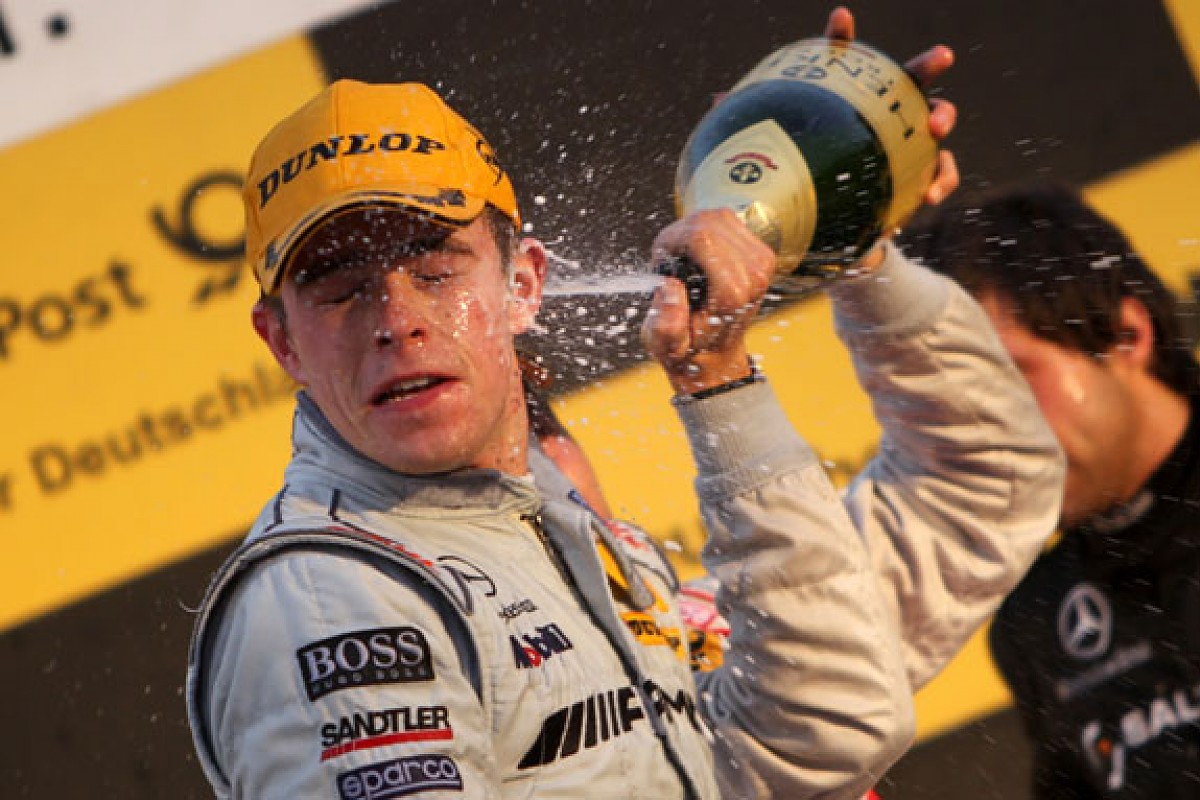