Sebastian Vettel and Ferrari dominated the opening morning of 2019 Formula 1 testing, sitting nearly two seconds clear at the top of the times at the lunchbreak

Vettel initially hit the front mid-morning using the 'C2' white-marked compound, before switching to the slightly softer yellow-marked 'C3' tyres for a series of shorter runs that pushed him well clear of the rest of the field.

Between two particularly fast runs where he set his best times, the last of which came just 20 minutes before the break, Vettel also completed a sequence of five consecutive sub-1m20s laps on another run, at a time before anyone else had managed to get below the 1m20s mark.

The Ferrari SF90 then reappeared shortly before the lunchbreak, with Vettel putting in another fast lap that was just two tenths slower than his best.

Sergio Perez eventually became the only other driver to get under 1m20s with a 1m19.944s - also using the C3 tyres - as Racing Point's 2019 car appeared for the first time.

Valtteri Bottas, who was the busiest of the drivers in the first half an hour of running as Mercedes got straight down to work, ended up third by the lunchbreak, setting his best time on C3s and completing 69 laps before handing over to Lewis Hamilton, who will drive this afternoon.

Kimi Raikkonen caused the first red flag of 2019 when he spun just five minutes into the session, sliding into the gravel at Turn 5 backwards and then beaching his Alfa Romeo when he tried to drive away. 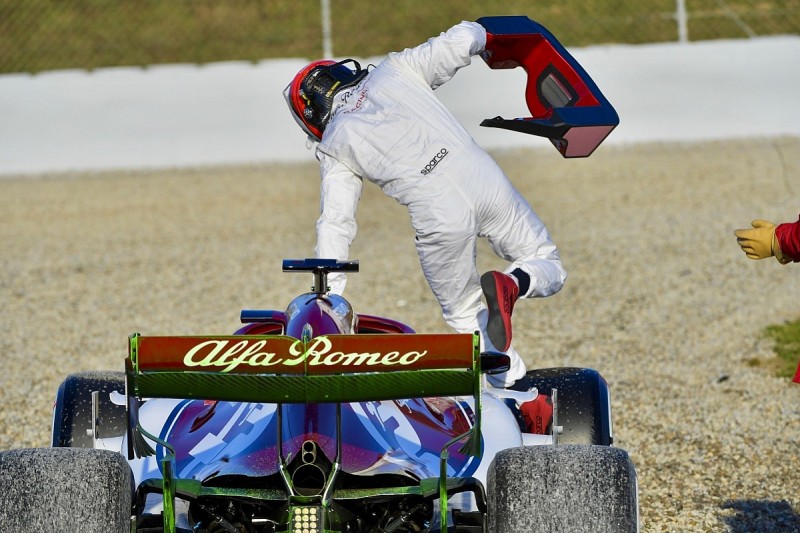 The Finn was back on track soon after, and 40 minutes before lunch he briefly put himself second in the times using C2s but was later knocked back to fourth by Perez and Bottas.

Before Raikkonen took second, Max Verstappen had also spent a brief spell as best of the rest in the Red Bull-Honda, running the white-marked tyre.

The new partnership got off to a quiet start with just a couple of laps early in the day, but Verstappen was then busy before lunch, moving up the times and bringing his lap count up to 52.

Behind Verstappen were McLaren's Carlos Sainz Jr and Nico Hulkenberg, who will hand over the Renault to new signing Daniel Ricciardo this afternoon.

Romain Grosjean was eighth for Haas, which lost a large chunk of running after he stopped at the final chicane with a loss of fuel pressure. The team completed just 18 laps in the morning session.

With only nine cars in action on Monday due to Williams not running, Daniil Kvyat's Toro Rosso brought up the rear in ninth.

The second Honda-powered team initially got off to a busier start than Red Bull, with Kvyat completing a series of installation laps while Verstappen was in the garage, but Toro Rosso ended the first session with just 35 laps to its name.