Having fallen out of contention for overall honours after multiple punctures and a roll in the opening days of the rally-raid, Bahrain Raid Xtreme driver has since turned his attention to individual stage victories, going all-out in his Prodrive Hunter in the second week of the event.

Since being handed a victory in Stage 8 due to a penalty for Carlos Sainz Sr, Loeb has been untouchable in the cars category - with his latest triumph on the 154km special between Shaybah and Al-Hofuf marking the continuation of his winning streak.

Although Stage 13 was one of the shortest of the event, Loeb’s winning margin over overall leader Nasser Al-Attiyah was an impressive 5m28s, the Frenchman making most of the gains in the second half of the day over the dunes.

The result means he has now leapfrogged former Peugeot star Ari Vatanen as the record-holder for the most number of Dakar stage wins in a row at six victories. Further, he has also become the first driver since Sainz in 2011 to win as many as seven stages in a single edition of Dakar, having also won Stage 4 last week.

Loeb’s unbroken streak in the second half of the event has been made possible by Toyota’s Al-Attiyah driving conservatively and not taking any major risks, focusing on top three results in each stage in order to safeguard his overall lead.

The Qatari driver once again finished near the front, ending the stage in second position after successfully holding off the sole surviving Audi of Mattias Ekstrom, who finished another minute adrift in third.

Behind, Eryk Goczal was a surprise fourth in his T4 class-entered Energylandia entry, beating the Toyotas of factory driver Henk Lategan and Overdrive’s Yazeed Al-Rajhi. 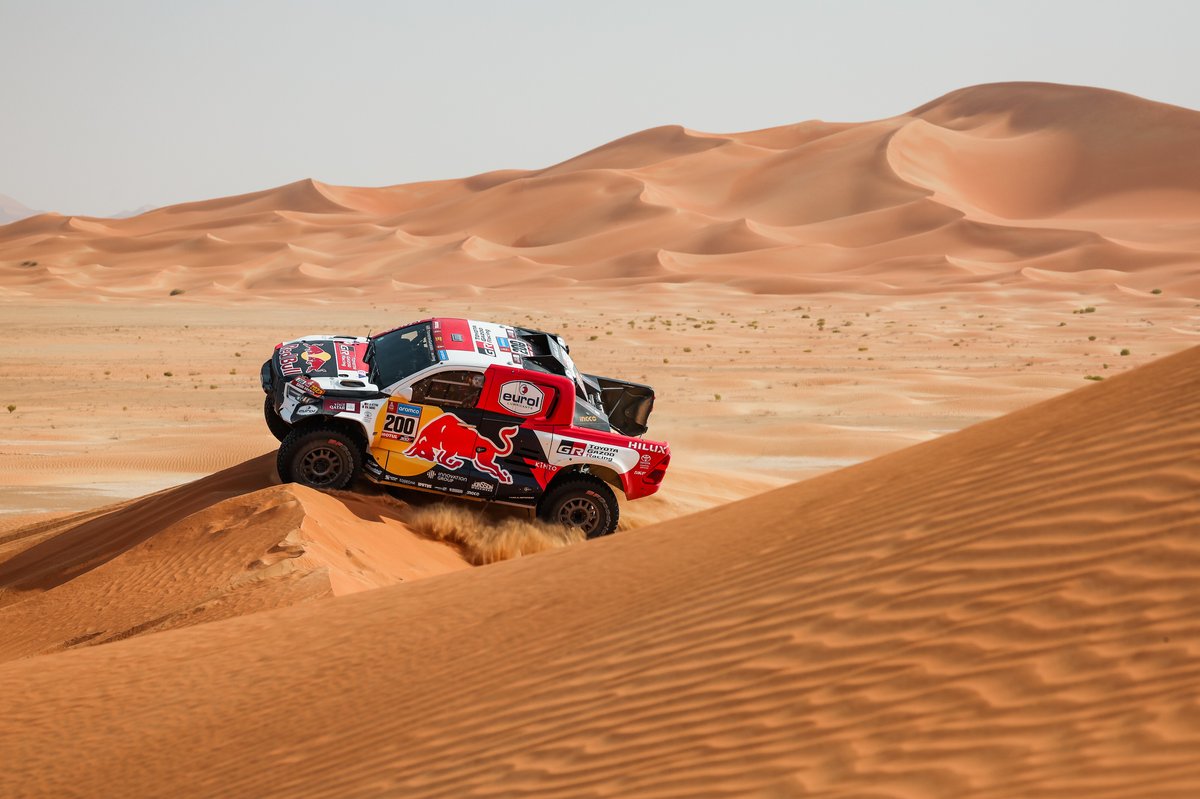 Jakub Pryzognski was the best finisher from the X-raid Mini team in seventh, ahead of rookie Lucas Moraes (Overdrive) and GCK Motorsport's Guerlain Chicherit.

In the overall standings, Al-Attiyah will take a near-unassailable lead of 1h21m42s into the final day of the rally, putting him on the cusp of a fifth career victory in Dakar and his second in a row.

Loeb has strengthened his bid to finish runner-up and is now over 13 minutes clear of Moraes, who looks set to finish as the rookie of the year after a consistent showing aboard his customer Toyota Hilux.

Factory Toyota duo de Villiers and Lategan are separated by around eight minutes in fourth and fifth positions respectively, with Martin Prokop next up in his Benzina entry.

A troubled day for Brian Baragwanath in which the Century driver flipped his car into a hole has elevated Overdrive's Juan Cruz Yacopini to seventh, ahead of Wei Han (Hanwei), Century team-mate Mathieu Serradori and Sebastian Halpern (X-raid).