Toyota driver Nasser Al-Attiyah secured his fifth victory in the Dakar Rally after a cautious run through the final test, won by Guerlain Chicherit.

In another characteristic display from the Qatari driver, Al-Attiyah switched to a conservative approach once all his rivals had fallen by the wayside, playing the long-game instead of going all-out for individual stage honours.

Finishing a safe eighth place on the final 136km test between Al-Hofuf and Dammam on Sunday, he took overall honours by 1hr20m49s in one of the most one-sided contests of the Dakar's recent history.

The result puts him second on the list of drivers with most Dakar wins in the cars category, just three behind record holder Stephane Peterhansel.

Although defending event winner Al-Attiyah was still the outright favourite going into the event, held on a longer 14-stage route from the west to the west east of Saudi Arabia, there was genuine belief that drivers from Audi and the Prodrive-run Bahrain Raid Xtreme team will be able to put up a serious challenge.

Victories in Prologue and the opening stage for Audi indicated that a proper multi-way fight was on the cards, but the German manufacturer’s challenge crumbled spectacularly over the following days, with Peterhansel and Carlos Sainz Sr eventually retiring from the rally-raid.

Peterhansel was the first to withdraw from the event when his car plunged from a height of six metres on Stage 6, with his co-driver Edouard Boulanger breaking a vertebra in the incident.

Sainz retired three stages later with his own crash while tackling a dune, but by that time he had already fallen out of contention after encountering mechanical problems on day 2 and a repeat of Peterhansel’s incident at the same section on Stage 6.

BRX’s lead driver Sebastien Loeb too was out of running by this point of the rally, having encountered multiple punctures and a roll in the opening days of the event. 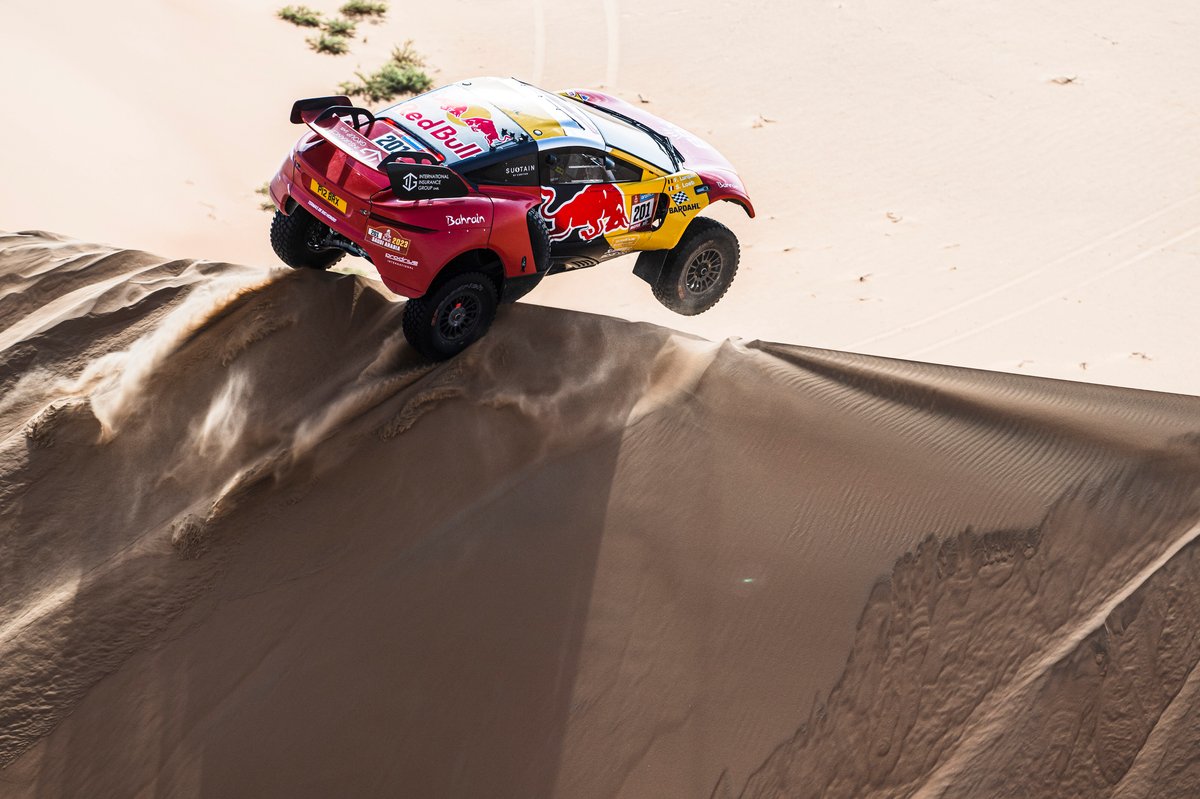 This meant that Al-Attiyah was already an hour clear of the opposition by the time he claimed what was his third and last stage win of 2023 on Stage 6, allowing him to take his foot off the throttle in the second week of the rally and ease to back-to-back wins.

Loeb eventually managed to pull off a remarkable recovery drive to claim second position, scoring a record six consecutive stage wins in the second week of the rally, as his Prodrive-built Hunter proved rapid on its second appearance in Dakar.

However, the result still fell short of the Frenchman’s expectations, meaning he will have to wait until at least 2024 to finally add a Dakar win to his list of nine titles in the World Rally Championship.

Third place in the overall standings went to Lucas Moraes, who surprised everyone on his maiden appearance in Dakar with a trouble-free run in his customer Toyota Hilux.

Two more drivers from the Toyota stable rounded off the top five in what was one of the strongest showings from the Japanese manufacturer, with factory drivers Giniel de Villiers and Henk Lategan finishing fourth and fifth respectively - separated by just seven minutes at the finish.

Another Toyota driver, Overdrive’s Yazeed Al-Rajhi, also impressed on his home turf with victory on Stage 7, but problems in Stage 9 left him out of running for a spot inside the top 10.

GCK Motorsport driver Chicherit bagged his second stage victory on Stage 14, after prevailing on Stage 3, to round off the top 10.

Chicherit pipped Mattias Ekstrom to the quickest time, the Swede hauling himself up to a provisional 13th place in the sole surviving Audi. His own set of problems had left him out of contention for victory after an encouraging first-place finish in the Prologue.