Toyota’s Al-Attiyah overturned a 1m34s deficit to Erik van Loon on the final split of the 430km Sea Camp to Alula stage, the fourth-longest stage of the 2023 Dakar, to win Monday’s contest by 14s from the Overdrive entrant.

The stage win promoted the Qatari driver and co-driver Mathieu Baumel to second place, 2m12s behind Audi’s Sainz in the overall classification.

Sainz was first on the course fresh from his opening stage win yesterday and faced arguably the toughest of the conditions leading the pack from the sandy shores across rock-covered mountains and narrow pathways.

The three-time Dakar Rally winner took third on the stage behind Al-Attiyah and van Loon, ending the day having conceded 5m05s to Al-Attiyah.

But Loeb was the biggest loser of the day, as three punctures saw the Bahrain Raid Xtreme driver bleed time to his rivals. The nine-time World Rally Championship title-winner dropped 1hr26m38s on the second stage to Al-Attiyah, dropping him from second place to outside of the top 30.

“It was a really bad day for us. We lost a lot of time with three punctures,” Loeb said.

“For me, there was absolutely no pleasure in the driving. It was really bad with a lot of stones.

“It was just a question of going very slow and trying to avoid a puncture. That was the only goal of the stage and in the end we had three.

“We had to try and repair one of the tyres and it took us a long time.” 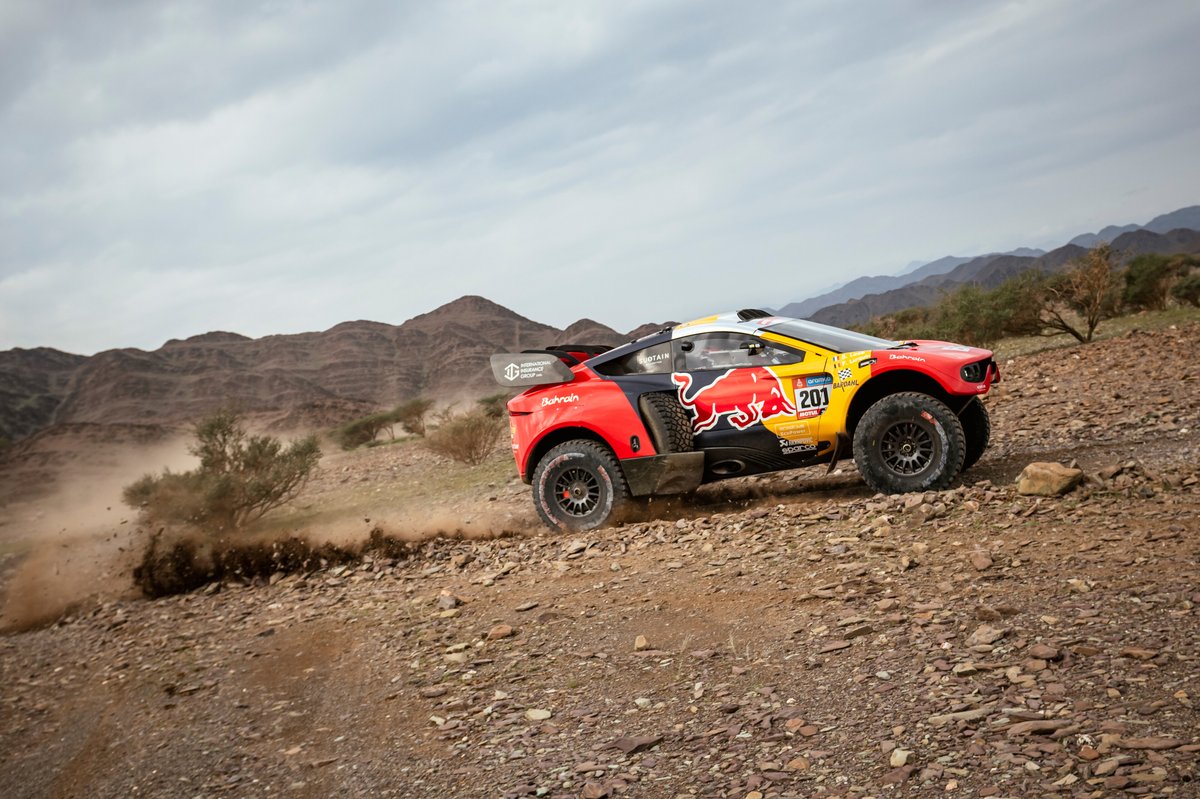 With Audi duo Stephane Peterhansel and Mattias Ekstrom – the latter given a 15-minute penalty for missing a way point on the opening stage – also hitting early trouble, the battle for victory is already emerging between Sainz and Al-Attiyah.

The pair have moved almost 25 minutes clear of nearest rival Mathieu Serrardori, who is third overall for Century Racing having ended the second stage in fourth place.

Serrardori is just 45s up on surprise package Simon Vitse in fourth overall for MD Rally, after a two-minute penalty for Giniel de Villiers restricted the Toyota driver to fifth in the general classification.

Yazeed Al-Rajhi continued his solid start to the 2023 event in the privateer Overdrive entry to take sixth overall, ahead of Orlen Benzina’s Martin Prokop and Audi’s Peterhansel.

Brian Baragwanath for Century and Toyota’s Henk Lategan round out the top 10 in the overall classification, with second stage star van Loon moving up to 13th.