Audi driver Carlos Sainz Sr took the lead of the 2023 Dakar Rally with a late charge in the opening stage on Sunday, while reigning Nasser Al-Attiyah struggled to eighth place.

Sainz’s team-mate Mattias Ekstrom led the majority of the 367km special near Sea Camp in Saudi Arabia, the former DTM ace grabbing the lead at the first checkpoint and steadily building his advantage from there.

But the complexion of the stage changed completely between the final two checkpoints, with Sainz producing a heroic effort to jump from fourth - and more than two minutes down - to clinch his 42nd career stage win in the Dakar Rally.

It marked an incredible turnaround for the Spaniard, a four-time overall winner of the prestigious rally-raid, as he had been sitting down in 30th place following the first checkpoint at 37km.

Ekstrom not only conceded a position to his more experienced team-mate Sainz but also the Bahrain Raid Xtreme entry of WRC legend Sebastien Loeb over the course of the day, the Frenchman likewise gaining a chunk of time on him in the final 90km stretch to the finish line.

Loeb, still chasing a maiden win in Dakar, was Ekstrom’s main challenger for most of the stage and ended the day’s action just 23 seconds behind Sainz’s winning Audi.

But having finished comfortably ahead of him in Saturday’s Prologue, Loeb only sits 10 seconds adrift of Sainz going into the second stage of the rally from Sea Camp to Alula on Monday. 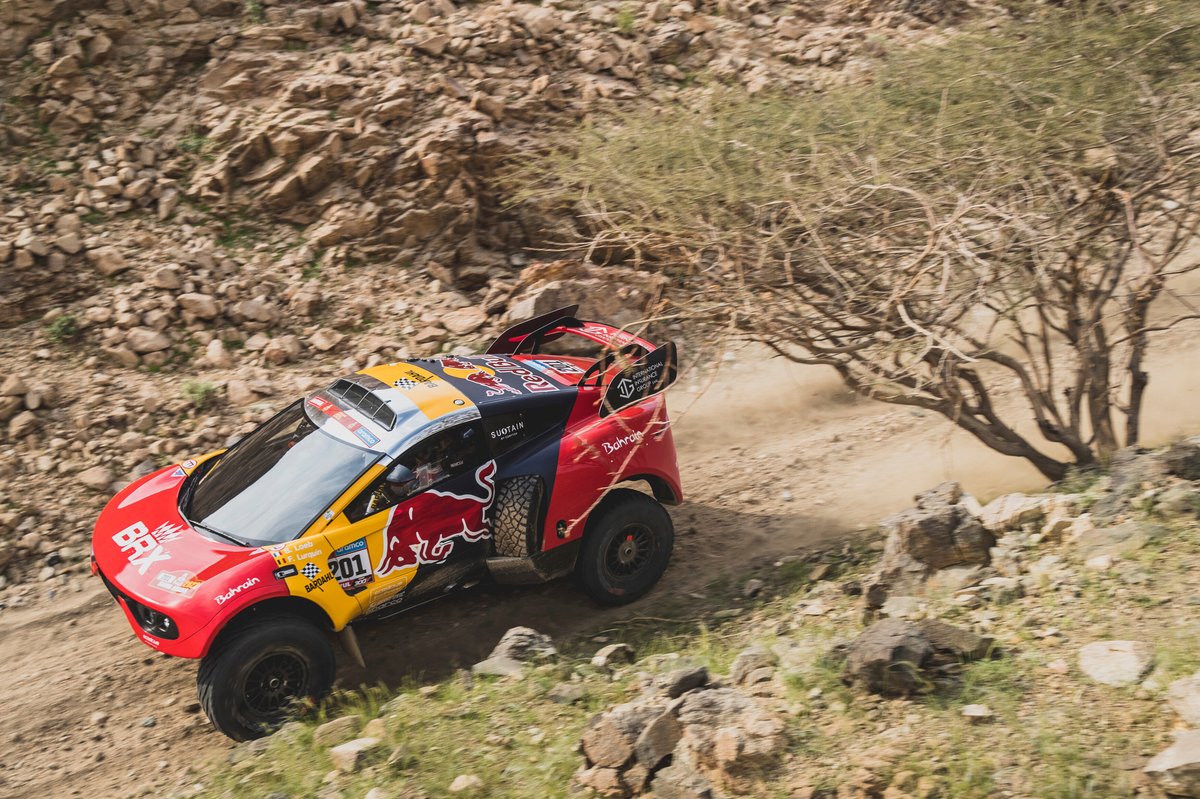 Ekstrom eventually ended the day 33s down on Sainz in the overall standings, having previously been a minute clear of his competitors at the penultimate timing point of the stage.

Fourth place went to French driver Guerlain Chicherit, who finished just over a minute down in a privateer Prodrive-built Hunter campaigned by his GCK Motorsport team.

Yazeed Al-Rajhi was another privateer who impressed during the first full day of Dakar as he beat all factory Toyotas in the Overdrive-run Hilux en route to fifth overall, just 2m01s down on Sainz’s hybrid Audi.

Seventh place went to Orlando Terranova in the second of the Bahrain entries, although the Argentine lost seven minutes to the leaders in what was a particularly short stage by Dakar standards.

Toyota star Al-Attiyah fared even worse as the Qatari driver dropped 7m07s over the course of the stage, haemorrhaging most of the time in the final section that featured a wide variety of terrain including dunes.

This put him eighth in the overall standings, just ahead of ‘Mr Dakar’ Stephane Peterhansel and the leading X-raid Mini of Jakub Przygonski in the top 10.

Peterhansel had been running near the front in the first half of the stage and stood as high as third in the standings, but lost a chunk of time between waypoints 3 and 4 to end the day the slowest of the three factory Audis.

He takes a 8m51s deficit to the second stage of the rally, which will run to a distance of 430km.