Having battled with Al-Attiyah on Wednesday before a rear wheel issue dropped him out of contention, Lategan was again among the frontrunners in the 421km special near Riyadh - even as he had to drive with the door open early on in the stage.

The 27-year-old grabbed the lead at the second checkpoint after usurping the X-raid Mini of Yasir Seaidan, with the electric Audis of Stephane Peterhansel and Mattias Ekstrom closely following him in second and third place respectively.

The South African briefly slipped behind Peterhansel at the 159km mark, but soon found himself back in the lead after the 14-time Dakar winner had to make an unscheduled pitstop to hand over his shock absorber to fix Sains’s stricken car.

Capitalising on his rivals’ misfortune, Lategan went on to score a stage win in only his second appearance in Dakar, beating the Prodrive/Bahrain car of Loeb by just under two minutes.

Nine-time WRC champion Loeb slipped to 17th position in the provisional order at one point but made rapid gains towards the end of the stage, securing a fourth top-three result in five stages to remain in the hunt for outright honours.

Lucio Alvarez ended up as top runner for Toyota’s customer squad Overdrive in third, while Matthieu Serradori put in an inspired performance for the Century marque to finish fourth ahead of Guerlain Chicherit (GCK Motorsport). 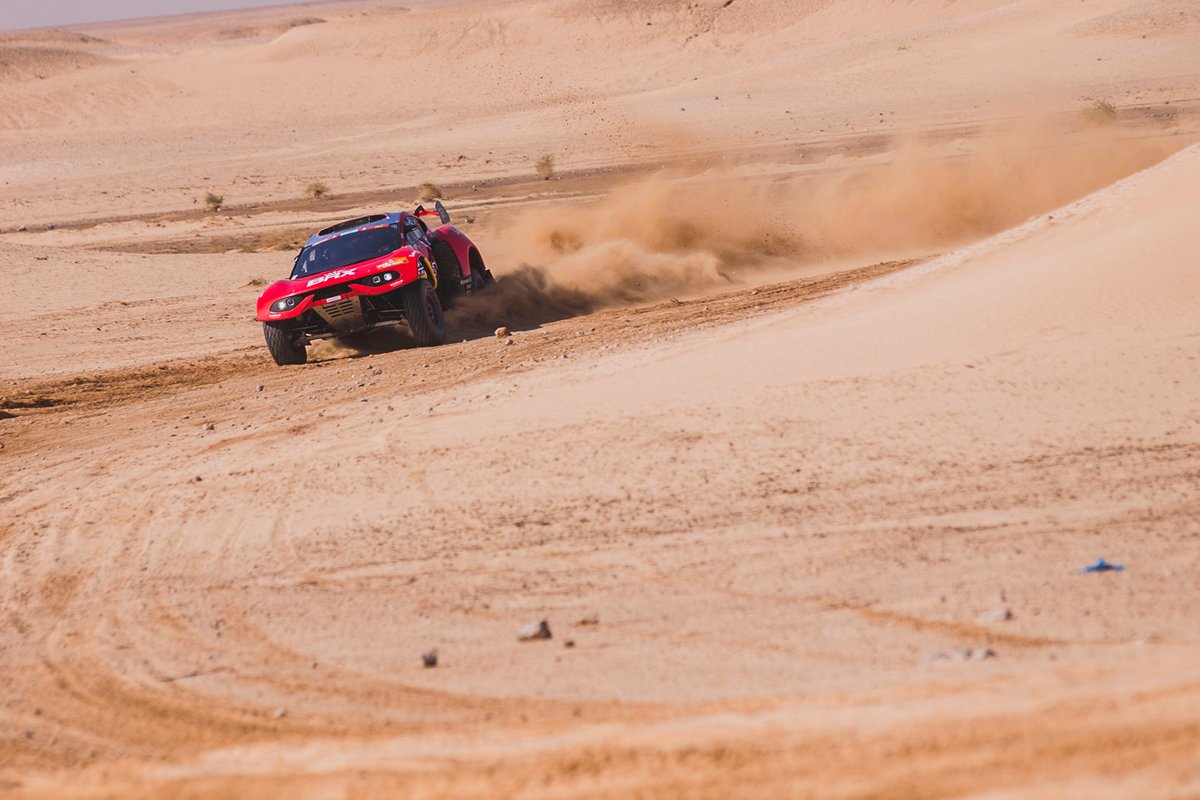 Three-time Dakar champion Al-Attiyah recorded his worst stage finish of Dakar so far, ending up only eighth in the order behind Jakub Przygosnki’s X-Raid Mini and the sister Toyota of Giniel de Villiers.

However, the Qatari driver dropped only five minutes to the leaders at the end of the stage and continues to sit atop the overall standings, albeit by a reduced margin of 35m10s over Loeb.

Alvarez and Yazeed Al Rajhi occupy third and fourth places respectively for the Overdrive team, benefitting from a five-hour penalty for de Villiers for hitting a motorcycle on Wednesday, with Vladimir Vasilyev completing the top five on the VRT BMW.

Ekstrom is now Audi’s highest-placed driver in 16th after setting the 20th-fastest time in the third RS Q e-tron, while Sainz has slipped to 21st place after losing an hour with mechanical gremlins.

Sainz's Audi came to a halt 201km into the stage with suspension problems, forcing him to call upon team-mate Peterhansel for help.

The Spaniard had been running as high as fifth at the fourth checkpoint, just over three minutes behind the leaders.

Apart from Sainz, several other notable contenders including de Villiers, stage winner Lategan and Prodrive’s Nani Roma sit outside the top 20 going into Friday’s sixth stage, which will also take place near the Saudi capital.