Cyril Despres took the lead of the 2017 Dakar Rally after picking up his first stage win in the car category, as erstwhile rally leader Sebastien Loeb lost time and Carlos Sainz rolled

On a tough day for all Peugeot drivers but Despres, the five-time Dakar bikes champion moved to the lead of the rally from fifth place.

The stage itself - a high-altitude test starting in Argentina's Jujuy and ending in Bolivia's Tupiza - featured the longest timed section of the rally so far at 258 miles, split by a small neutralised zone on the Bolivian border.

Loeb, who led a Peugeot 1-2-3 heading into the stage, quickly dropped down the order.

He lost 20 minutes with what he reported to be an engine problem on the approach to the second waypoint, where team-mate Stephane Peterhansel and several competitors in the bike category had also lost time.

With Sainz having dropped 10 minutes earlier in the stage, Despres looked well-poised to capitalise and secure his first stage win for Peugeot, which he managed ahead of former World Rally Championship driver Mikko Hirvonen.

Sainz was chasing back and was all but guaranteed to assume the lead of the rally at the finish line, only to roll his car and get stuck in a ravine. 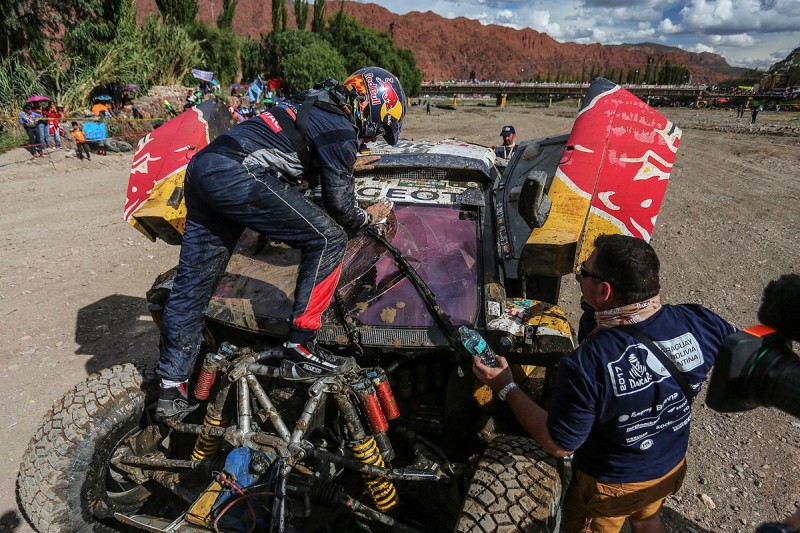 The Spaniard's misfortune left Despres leading the rally four minutes clear of Peterhansel, with Hirvonen close behind, having moved past Nani Roma late on.

Loeb now sits seven minutes off the rally leader, with Roma making up a top five separated by 10m30s.

While Peugeot's drivers dropped a fair share of time in the stage, many of its rivals found themselves in no position to capitalise.

Hirvonen's teammate Yazeed Al-Rajhi, who had been feeling unwell throughout the first stage at altitude on Wednesday, opted to retire from the rally after arriving to the neutralisation zone.

At Toyota, Giniel de Villiers lost time early in the stage, adding to the deficit that had been created by fuel pump issues on his Toyota Hilux on Wednesday.