The updated Infiniti Q50's debut 17th place in the first British Touring Car Championship race at Snetterton "was as good as a win", according to its driver Aiden Moffat

Infiniti withdrew its factory support of the Q50 project after just three rounds of the 2015 season, after which the two cars ran as independents and scored just one point before withdrawing prior to the start of the 2016 season.

Across the first-half of 2019, Moffat scored just one top-five result in the Mercedes A-Class - a car which fell behind the development curve during pre-season testing.

That led Laser Tools Racing to buy the ex-Support Our Paras team Q50s, upgrading one from the GPRM-supplied parts to the current RML-specification subframes.

"I expected to still be down the bottom-half of the 20s, we're only focusing on improving the car and development, so to get into the top 20 was as good as a win for us."

Moffat's pace in the race was flattered by his decision to run the fastest soft-compound Dunlop tyre, while many of those around him were on the hard rubber - approximately 1s per lap slower. 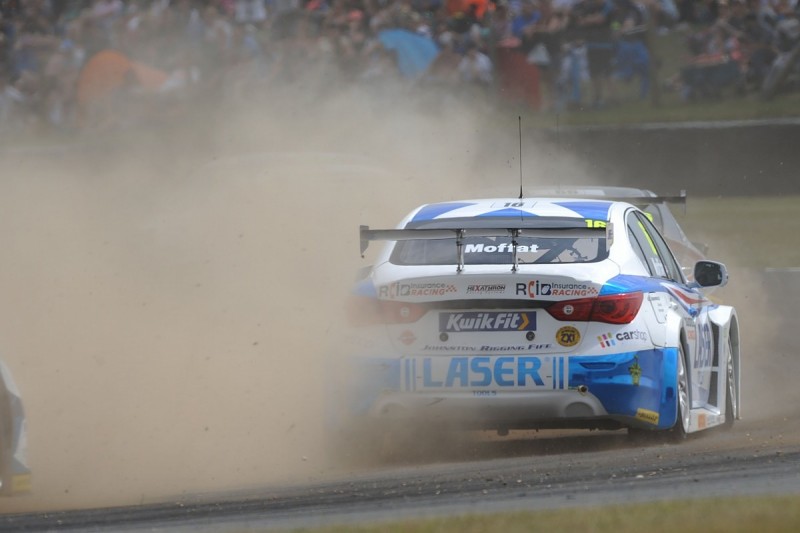 Moffat added: "We thought there was no point wasting a good tyre for race three [with the threat of rain] to try and get a feel for how the car acts.

"With the hard tyre, it's hard to learn because you need to adapt the car to get it to start working and for the tyre to dig in.

"The hard tyre just feels like it glides across, so it can make it hard to learn anything."

The numerous tight corners at Snetterton means the circuit has traditionally favoured front-wheel-drive machinery, whereas the Q50 saloon is rear driven.

It is the first time Moffat has raced a rear-wheel-drive car in the BTCC since making his series debut in 2013, but Moffat praised the drivetrain for providing the car with predictable handling in the faster turns.

"The car feels very good through the high-speed [corners]," he said.

"In this, you can hustle the car whereas in front-wheel-drive the rear will be loose.

"We tried three completely different set-ups between FP1, FP2 and qualifying and then kind of mashed them together a bit for race one.

"We want to go dramatic [with the set-up] just now because if we keep tweaking it will take us forever and a day, we don't really even know the car's operating window or sweet spot.

"The more changes we can try, the more data we can take back.