Newsham was drafted in to the seat of one of the team's Chevrolet Cruze machines for the previous rounds at Knockhill in Scotland as regular driver Kelvin Fletcher stepped down as he was about to become a father.

However, Fletcher's child has yet to arrive and so 49-year-old Newsham has kept the drive for another three races.

Newsham, who had been a regular in the championship since 2011 up until the start of this season, qualified 10th at Knockhill and took a best finish of seventh place in the opening race.

"I certainly learned a lot last time, and that will give me confidence for this weekend," Newsham said.

"The car has moved on a lot since I had last raced it in 2015 but Knockhill wasn't particularly suited to it. We should be a lot stronger at Rockingham."

After opting out of the BTCC at the start of 2016, Newsham instead raced with Power Maxed Racing in the British Rallycross Championship in a Ford Fiesta Supercar.

However, after his return to the BTCC at recently, Newsham has decided to shelve that campaign and concentrate on a full-time tin-top return in 2017.

Power Maxed Racing has put its Fiesta up for sale.

"The reaction I had to my return on social media was amazing," he said. "After I raced, it went to another level.

"I didn't think anyone would really miss me, but I couldn't have been more wrong.

"I haven't signed any deals for next year yet, but it is certainly my target [to be back in the BTCC]." 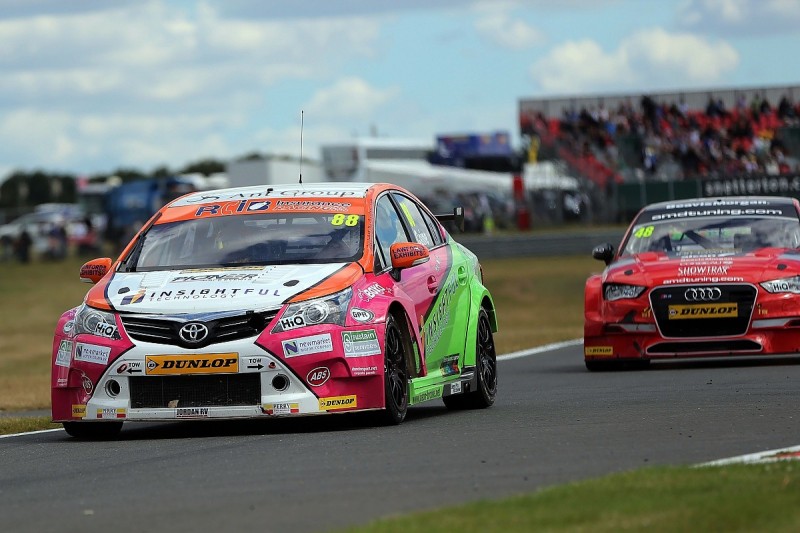 Michael Caine has been forced to step down from the British Touring Car Championship with immediate effect due to a back injury.

The former British GT champion will be replaced at Rockingham this weekend by Team Hard principal Tony Gilham, who will handle the Toyota Avensis for the first time since he raced at Brands Hatch at the end of last season.

Caine aggravated a back injury at Knockhill and could only take part in one of the three races.

"I will have to do some emergency gym work before the weekend to get myself fighting fit, but I am looking forward to the challenge," said Gilham.

"We have some quick young drivers at Team Hard [Jake Hill and Michael Epps] so it will be good to see if the old boy can keep up."

The team is unsure whether Caine will return to the cockpit this season.

Dan Cammish took the first win of his British Touring Car Championship comeback season by leading from pole position to the chequered flag at Thruxton.