BTCC Thruxton: Inside the series' weekend of Dunlop tyre dramas

Thruxton was a wild weekend for the British Touring Car Championship, and tyres was the subject on everyone's lips

The demands of the abrasive nature of Thruxton and the high speeds around the circuit mean that control supplier Dunlop always brings a harder-spec tyre to cope with the 2.36-mile speedbowl.

Dunlop's communications director James Bailey admits that the firm was aware that there might be problems at Thruxton after the opening free practice session on Saturday morning.

Several cars were affected by tyre failures in that session, including Adam Morgan's Ciceley Racing Mercedes-Benz, which went of the road and caused a red flag shortly before the end.

There was a multi-car accident in a sweltering race one, caused when Matt Neal had a tyre failure on his Honda Civic Type R.

That prompted crisis talks between the BTCC bosses and Dunlop and, after that, the decision was taken to shorten the races from 16 laps to 12 laps.

"We were pretty confident, but we were aware from the opening free practice session that there could be problems.

"A number of the cars are fitted with new RML control parts this season.

"They have proved to be very efficient and they mean that more loads get transmitted through the tyre.

"That was becoming clear from the start of the weekend."

The unseasonal high temperatures also had an impact on the tyres' performance, and was another factor in the decision to truncate the races.

But series director Alan Gow has other views on exactly where the problems lay last weekend.

"Every year, without fail, in dry race one at Thruxton, some teams have tyre failures, usually as a result of pushing the boundaries either on their suspension set-up or over-use of the kerbs," he said.

"And then, as if by magic, in races two and three they usually don't have those same problems because they altered their set-up or driving style to suit.

"The exact same thing happened this year, exacerbated by the high track temperatures.

"The fact is that only four cars in that first race had tyre problems - so that's some 85 per cent of cars that didn't have that issue.

"And three of those four tyre failures were as a result of kerb strikes.

"It's no coincidence that those who took the recommended route on set-up as well as avoiding the over-use of kerbs, such as Morgan did, reaped the rewards: even whilst carrying full success ballast.

"That's not to say it isn't being looked at - of course it is, very seriously.

"But everyone is quick to just blame the tyres and share no responsibility...yet how come those same tyres do the same race distances on the same cars, for the next two races on the same day in the same track conditions but without the same amount of issues.

The drivers were grumpy, and even 1992 champion and ITV commentator Tim Harvey was extremely concerned with driver safety after the opening race.

The drivers were coming up with all sorts of potential solutions, although none of them was keen to go on the record.

The ideas ranged from removing all success ballast for the weekend, reducing the turbo power of the engine or even hosting the Thruxton rounds at a cooler time of year.

In the end, the races were completed without too much further drama: Andrew Jordan's puncture in the final race was just that, a pure puncture not caused by the track or the weather.

The issue is unlikely to happen again either. The BTCC bosses have already announced that there will be a new spec of tyre coming for 2016.

Autosport understands that it will be significantly wider than the covers currently used in the championship.

Bailey said that the new tyres would be tested during the summer and they will be introduced for all rounds next year.

"They are going to be somewhere between a GT4-spec tyre and a World Touring Car Championship tyre," said Bailey.

"It means that the tyres will have a bigger footprint, which means that we should not see a repeat of this problem."

That is something that will be a relief for the teams, drivers and the loyal British Touring Car Championship backers Dunlop too. 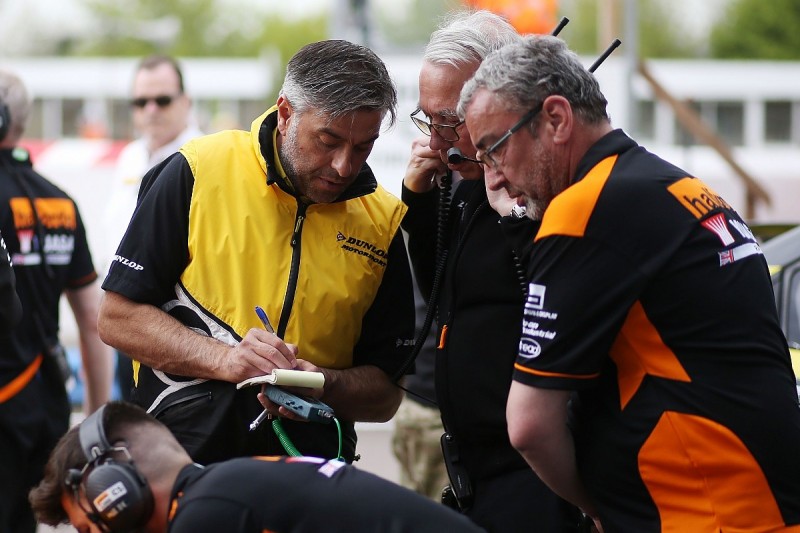