Cammish blasted away from pole position and was never headed as he led home team-mate Matt Neal in the second one-two of the day for the Team Dynamics cars.

Cammish said: "That was very tough with full [ballast] weight - so I put my foot down as hard as I could at the start and got a bit of a gap.

"Then the team was telling me that Matt was coming under pressure behind me and asked me if I had anything in hand.

"I thought I had but when I pushed, it wasn't really there so it was hard work.

"But I am thrilled to make it back-to-back wins."

Jack Goff had run in second place initially in his Eurotech Racing Honda Civic until it retired with an engine problem, which promoted Neal.

He still had to work hard for second place as he was under severe pressure from the WSR BMW 125i M Sport of Andrew Jordan.

Over the final few laps, championship challenger Tom Ingram (Speedworks Motorsport Toyota Avensis), who had flown through the order in his ballast-free machine having started in 14th. 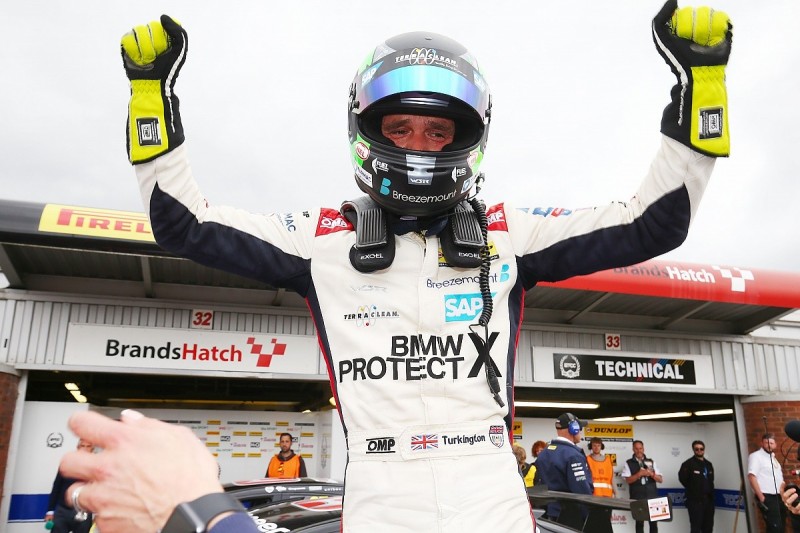 Fourth place was not going to be enough for Ingram as Turkington was running in 11th place, which was enough for him to claim the crown.

Then, on lap 13, Turkington and the Honda Civic of Dan Lloyd made contact at the top of Paddock Hill Bend and that forced Turkington's WSR BMW through the gravel and outside the top 20.

Ingram still needed to improve on fourth to stay in the title hunt and pushed Jordan hard to unseat him, and there was even brief contact between the pair going through Surtees with two laps to go.

However, it wasn't enough to complete the move and he finished fourth.

That handed the crown to Turkington, to add to his 2009 and 2014 victories, all three being in BMWs.

Turkington said: "I really thought it was all over when I was going through the gravel.

"In my head, I was already planning what my strategy would be going in to race three because I thought I would have to fight some more. It was a real roller coaster."

Josh Cook, who finished 10th in his Power Maxed Racing Vauxhall Astra, has been drawn on pole for the reversed grid race three.