Outgoing champion Ash Sutton won the final British Touring Car Championship race of the season by 0.032s after a dramatic dash to the flag in the reversed grid race

The Team BMR Subaru Levorg racer worked his way into second place after eight laps of the event, and set about slashing the 0.8s advantage that had been built up by the Power Maxed Racing Vauxhall Astra of Josh Cook, who started on pole position.

The two fought a mighty duel and it looked as if Cook had done enough, but Sutton inched around the outside of his rival as the two cars powered towards the finish line.

Sutton did just enough to take his sixth win of the season to cement fourth place in the standings. 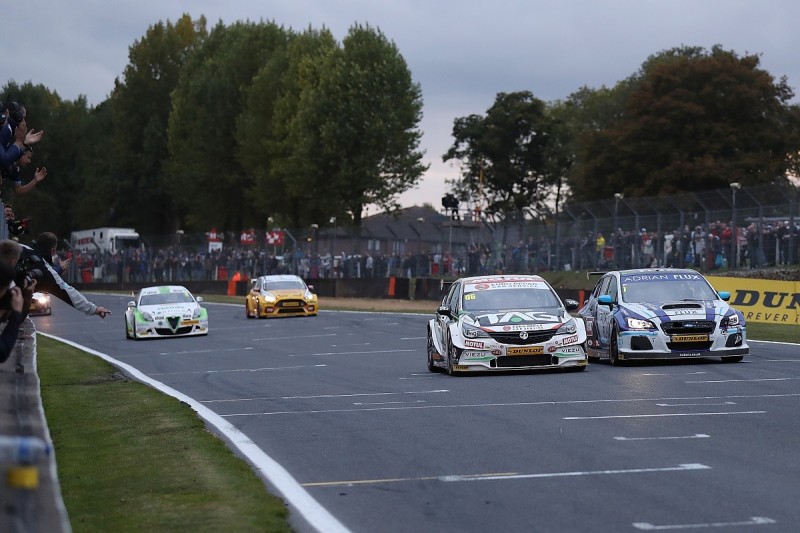 "I was laughing and smiling inside the car - that was one of the best races I have had in the BTCC," said Sutton, who is good friends with his defeated foe. "And it had to be with that guy.

"I didn't make a great start but got my way back though and what a way to finish the season."

Cook said: "I don't think I could have pushed the throttle down any harder on the run to the line: I think I had both feet on it at one stage.

"What a great race and was great to race against Ash. My car was just a little bit too tail happy to hold on, but I am still smiling."

Rob Austin led the early stages of the event in his HMS Alfa Romeo Giulietta until Cook managed to unpick his defences into Paddock Hill Bend on lap five.

Sutton deposed Austin two laps later to set off on his charge. Austin, though, managed to hold on to third place, even though he had been under pressure from the Motorbase Performance Ford Focus of Tom Chilton.