Jake Hill topped the single free practice session for the final round of the British Touring Car Championship at Brands Hatch, with Ash Sutton the quickest of the title contenders

Habitual BTCC free practice pacesetter Hill was as quick out of the blocks as ever, and lapped his AmD-run MB Motorsport Honda Civic Type R considerably quicker than the opposition on a wet track.

The one-hour session began with no rain falling, but with intermittent light sprinkles of rain the track never really got any quicker, even though chinks of blue sky began to appear beyond the outer paddock-skirting M20.

Hill ended up 0.225 seconds - a large margin on the Indy Circuit - ahead of the Laser Tools Racing Infiniti Q50 of Sutton.

Sutton enters the weekend nine points adrift of championship leader Colin Turkington in his bid for a second BTCC title, and the Infiniti looked very malleable in the wet conditions, allowing its drivers to really attack.

While Sutton was second fastest, team-mate Aiden Moffat was fourth.

"So far so good - I mustn't grumble," said Sutton, whose car is crewed by his old BMR Engineering Subaru technicians.

"We've always had a very good car in the wet regardless - that's something we've carried over from what we did with the Subaru.

"That was a very good session." 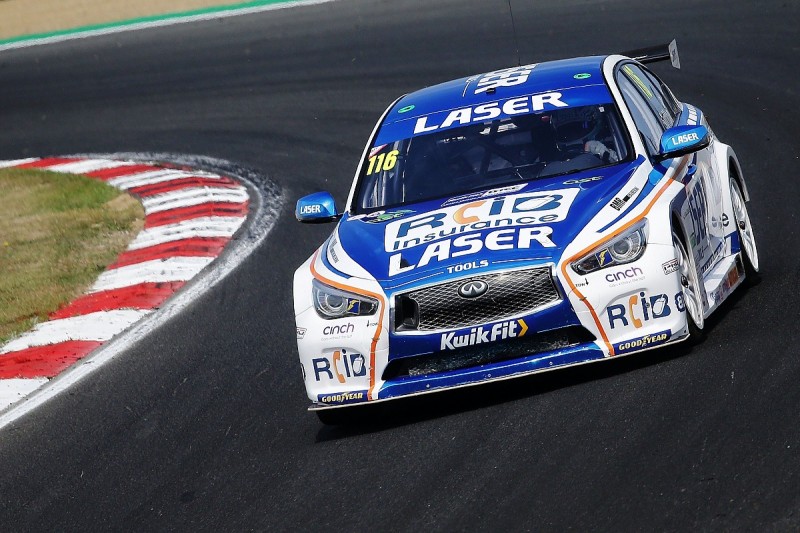 Third in the championship and very much in contention, Dan Cammish was sandwiched in between the two Infinitis in third spot with his Team Dynamics-run Honda, in which he appeared to be really attacking.

Tom Ingram, currently fourth in the standings, is in the picture too with fifth position in the Speedworks Motorsport-run Toyota Corolla.

Sixth place went to the last of the title contenders, Motorbase Performance Ford Focus driver Rory Butcher, although the Scot only has the slenderest of mathematical chances of the championship.

Butcher was backed up nicely by Motorbase Ford team-mate Ollie Jackson, who was seventh fastest.

That was despite Jackson losing it into Clearways early in the session and backing into the tyre wall, although the Motorbase squad had him back out again without too much loss of time.

The Excelr8 Motorsport Hyundai i30s both made it into the top 10, with the ever-hard-charging Chris Smiley eighth fastest and Senna Proctor 10th, either side of the BTC Racing Honda of Josh Cook, who had an off late in the session.

The team said it did not use any new tyres in the session, with WSR supremo Dick Bennetts adding: "Colin's got a bit of understeer, but he doesn't push that hard until he has to."