It was Sutton leading the way when the second of three red-flag interruptions occurred, with the field allowed 10 more minutes to fight for pole position.

It wasn't long before Butcher lowered the pole time, and then Ingram almost immediately pipped him to give the Speedworks Motorsport-run Toyota Corolla its first pole position of the year, by 0.024 seconds.

"It was super-slippery and that was a difficult session," Ingram said. "It took a while to get into the rhythm - the circuit felt very difficult to free practice, and we were actually chasing set-up.

"'Spenny [race engineer Spencer Aldridge] came over the radio with some set-up changes, and they were inspired."

Butcher, who has only the slimmest of title chances, was happy with his lap in his Motorbase Performance Ford Focus, "but Tom just pipped us".

Sutton was frustrated to end up third in the Laser Tools Racing Infiniti Q50, having held the top spot for some time, but claimed to be leaving some performance on the table because he was mindful of his qualifying mistake at Croft last month, when he caused a red flag and had his best time deleted.

He had already set what turned out to be his best lap when he spun at Clearways and nerfed the tyre barrier with the left front, but continued without pitting before spinning again at the same corner.

The Dynamics crew attempted to patch up the Honda during the second red-flag stoppage but, like Sutton, Cammish could not improve.

Ollie Jackson continued his strong form to take fifth in the second of the Motorbase Fords, and he will share the third row with the AmD-run MB Motorsport Honda of Jake Hill.

Hill, who yet again topped free practice, once more could not replicate that in qualifying, and he caused the second red flag when he went off at Paddock Hill Bend, the Honda coming to rest against the tyre barrier.

Hill's best lap would have been good enough for fifth, but that was deleted for causing the red flag. 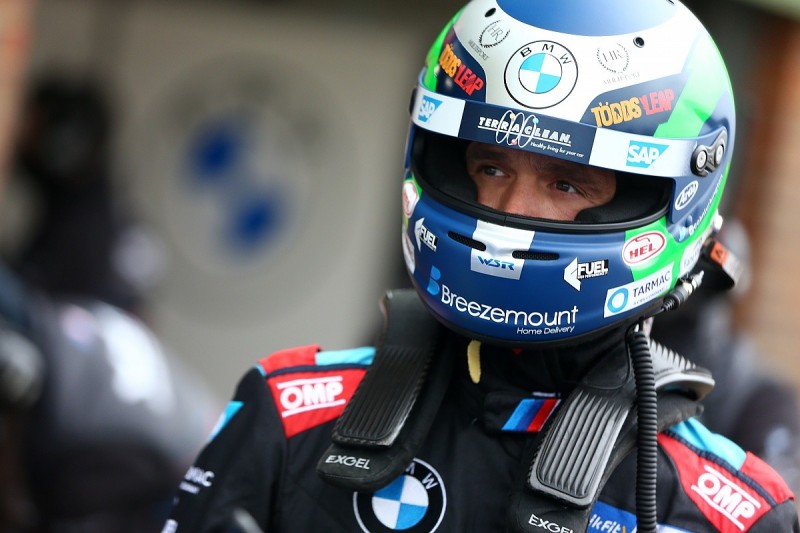 Turkington's fourth-row spot came after he claimed that he was "having to wring the neck" of his West Surrey Racing-run BMW 330i M Sport.

Some set-up changes during the second red-flag break played their part in lifting Turkington from 12th to eighth, before he made a late gamble to take an extra set of tyres.

That was foiled when a third red flag - which caused the session to be prematurely concluded - was caused by Carl Boardley spinning his ex-WSR Team Hard BMW 125i into the gravel at Paddock, but Turkington did clinch the Goodyear WingFoot Award, for which points are allocated for qualifying across the season, by one point from Cammish.

No doubt to Turkington's chagrin, he will line up on the fourth row alongside his nemesis from 2019 BTCC finals day: Matt Neal in the second Honda.

Like team-mate Cammish, Neal was in the wars - he spun at Clearways and hit the barriers with the back end of his Civic, and had a further excursion through the gravel at Paddock.

Paul Rivett, on only his second BTCC outing, did a cracking job to put the Trade Price Cars Audi S3 ninth, with Josh Cook completing the top 10 in his BTC Racing Honda.

The first red flag was caused after just four minutes, when Senna Proctor shunted his Excelr8 Motorsport Hyundai at Druids.