Ash Sutton has moved into a nine-point lead with one race to go in the British Touring Car Championship by dominating the second race of the Brands Hatch finale.

With most of the field on slick tyres on a drying track, Sutton was in a class of his own in the Laser Tools Racing Infiniti Q50, and at one point held a lead of over eight seconds.

But Sutton's potential gain in his championship advantage was minimised thanks to a fighting drive from Colin Turkington, who finished third despite damage to his West Surrey Racing-run BMW 330i M Sport, while Dan Cammish retains a tiny mathematical chance of the crown. 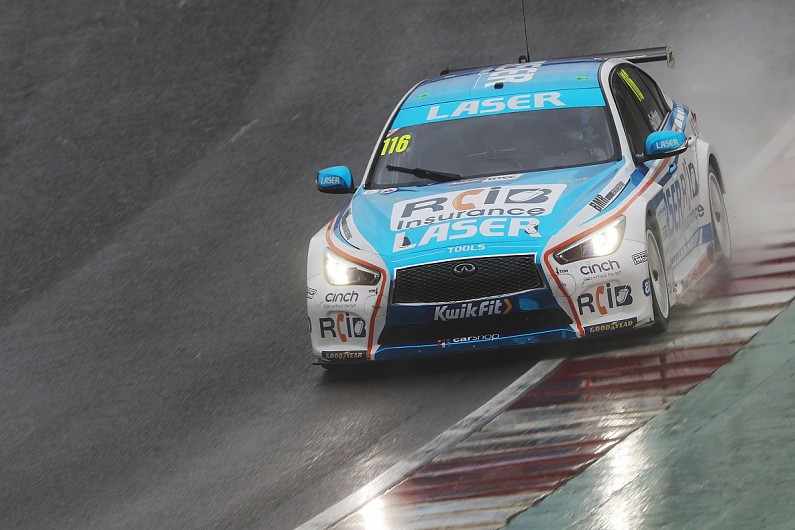 Tom Chilton, who lined up his BTC Racing Honda Civic Type R 12th on the grid, was the highest-placed starter on wet-weather tyres, and passed Sutton for the lead at the end of the opening lap.

By the fourth lap Sutton was catching Chilton, and at one-third distance he found his way past into Surtees to take the lead.

Another grooved-rubber starter, Andy Neate, was lying third in his Motorbase Performance Ford Focus, and it was just after the slick-shod hordes had passed Neate that absolute mayhem kicked off.

Turkington, who had been let past by WSR team-mate Tom Oliphant a few laps earlier, picked up damage to his right-front in the drama, with smoke issuing from this corner for much of the rest of the race.

Once this gaggle had dispatched Chilton, it was Ingram in second from Cammish, Turkington and Jackson. 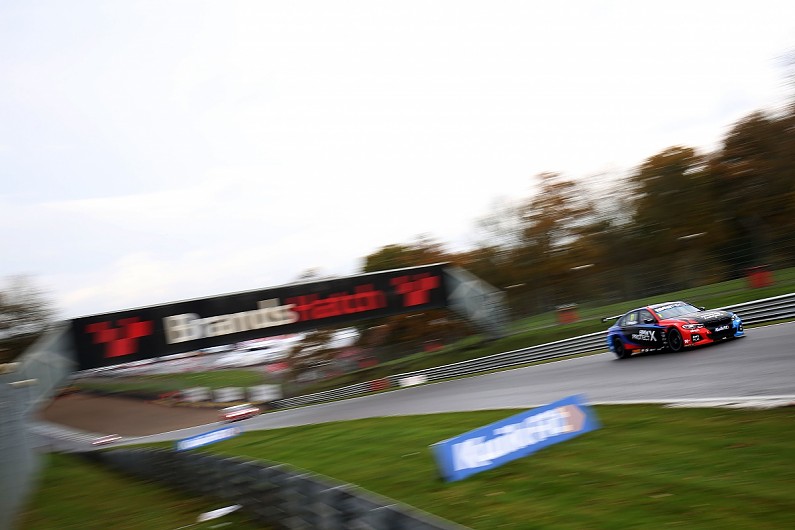 At first Ingram was slashing the margin to Sutton by a second per lap, the Speedworks Motorsport Toyota Corolla driver trading fastest laps with Turkington, but Sutton's Infiniti came on strong and he claimed the bonus point for fastest lap with three tours to go.

Sutton crossed the line to win by 4.762s from Ingram, who has now lost any hope of the title.

"I just kept my head down and pulled out a gap, although I'd have liked to have seen more cars between me and Colin," said Sutton.

Turkington, carrying just 12kg of success ballast on the BMW in this race, got third from Cammish by accident in a terrifying moment as the penultimate lap started.

Paul Rivett had spun his Audi at Paddock, and Cammish and Turkington were at that point lapping the Power Maxed Racing Vauxhall of BTCC debutant Brad Philpot.

Cammish checked up, and Turkington, his vision obscured by the Vauxhall, showed incredible reflexes to jink right at the last moment and pass the stricken Audi.

Fourth place for Cammish keeps the Team Dynamics Honda Civic Type R man in the title picture, but he is 22 points adrift.

Even if Cammish wins the final race and sets fastest lap, he needs Sutton not to score points and Turkington out of the top seven to wrest the crown on countback of second places.

Jackson continued his strong day to claim fifth in his Ford from the Ciceley Motorsport Mercedes A-Class of Adam Morgan, while the battered MB Motorsport Honda of Hill soaked up massive pressure from Senna Proctor (Excelr8 Motorsport Hyundai) for seventh.

Cook and Butcher completed the top 10.

Four more titles were clinched in this race, with BMW winning the manufacturers' crown, the WSR-run Team BMW winning the teams' award, Laser Tools Racing claiming Independent teams' laurels, and Michael Crees wrapping up the Jack Sears Trophy for those who have never finished on an outright BTCC podium.

Driving standards officer Jeff Allam, who is retiring from the role after this weekend, did the draw for the reversed grid - the ex-Vauxhall and Rover star picked out the number 12, meaning Sutton's LTR Infiniti team-mate Aiden Moffat will start the final race from pole.