Honda's Dan Cammish took victory in the first race of the British Touring Car Championship finale at Brands Hatch, while Ash Sutton's second place has boosted him into the points lead

Cammish held on from a charging Sutton, whose Laser Tools Racing Infiniti Q50 slashed the gap to the winning Team Dynamics-run Civic Type R once it had got into second place.

Cammish lined up fourth, and even dropped momentarily to fifth behind the fast-starting Motorbase Performance Ford Focus of Ollie Jackson away from the line, but the Yorkshireman used a wide line around Paddock Hill Bend to not only see off Jackson, but make up another position on the other Motorbase Ford of Rory Butcher.

Butcher made it hard for Cammish, making him go the long way round Druids too, but the Honda secured third on the inside of Graham Hill Bend.

Up front, Tom Ingram had got a strong getaway from pole and his Speedworks Motorsport-run Toyota Corolla led from Sutton, but Cammish quickly latched onto the leading duo.

The Honda was clearly the quicker car at this stage of the race and, when Sutton ran wide under pressure at Paddock Hill Bend on the fourth lap, Cammish got up his inside to secure second at Druids.

Now Cammish began pressuring - and nudging - Ingram, who said he was suffering with lack of grip at the front end of the Toyota all the way through the race, but in turn that left him vulnerable to Sutton, who was just about to draw abreast when the safety car was called following a clash between Sam Osborne and Glynn Geddie at Druids. 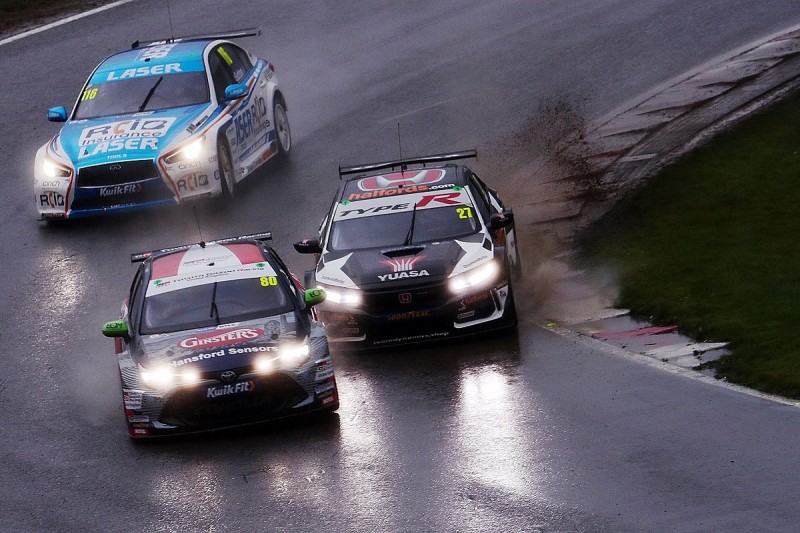 Cammish took just over one lap after the restart to make his move on Ingram.

Once again it was up the inside into Druids, but Ingram didn't give him much room and the Honda squirmed under braking thanks to the front-right wheel being on the grass.

With seven laps remaining, Cammish had built a gap of over one second, and this doubled as Ingram came under pressure from Sutton.

Sutton found a way past the Toyota into Surtees with just over five laps to go, but Cammish's margin was now 2.561s.

Now Sutton, who reported his Infiniti took time to switch its tyres on, was flying, and he nabbed the crucial point for fastest lap away from Cammish.

Cammish held on to win by 0.813s, with Ingram third and Butcher, whose microscopic title chances are now over, in fourth.

"We knew we had a quick race car, and I'm just glad I put it to good use," said Cammish.

Of the pass on Ingram, he added: "I'm pretty sure you're meant to leave a little bit of room for the guy overtaking you - my right-front was on the grass."

A strong drive from Jackson meant he completed a Motorbase 4-5, with Jake Hill shadowing the Fords throughout in his AmD-run MB Motorsport Honda to take sixth.

Matt Neal was seventh all the way in the other Dynamics Honda, and initially it was pre-race points leader Colin Turkington behind him in his West Surrey Racing-run BMW 330i M Sport.

But Turkington just didn't have the pace of the leading contenders, and lost eighth spot to Josh Cook's BTC Racing Honda just after the safety car.

That means Turkington now trails Sutton by two points, with Cammish just 13 off the summit and Ingram 26 adrift, with a total of 44 on the table.