Despite carrying 54kg of success ballast owing to his second position in the championship, the 2017 champion set two laps good enough for pole as the session moved into its latter half.

The performance reversed the poor qualifying results suffered by Sutton in the previous two rounds, and underlined that he is a major threat for the 2020 title.

"We needed that - it wasn't easy," said Sutton.

"The past couple of rounds we've struggled for pace due to issues in free practice, but we've just had a clean day today.

"This time we got more of an indication of where we are at [in free practice] and the car was spot-on."

Practice pacesetter Hill was the most significant improver after the session was restarted with seven minutes on the clock following a stoppage after Matt Neal had crashed his Team Dynamics-run works Civic at the exit of the chicane.

The old-spec FK2 Civic of Hill has suffered a series of engine failures this season, and again in this session there was a misfire on the first run before some wiring was replaced in the pits. 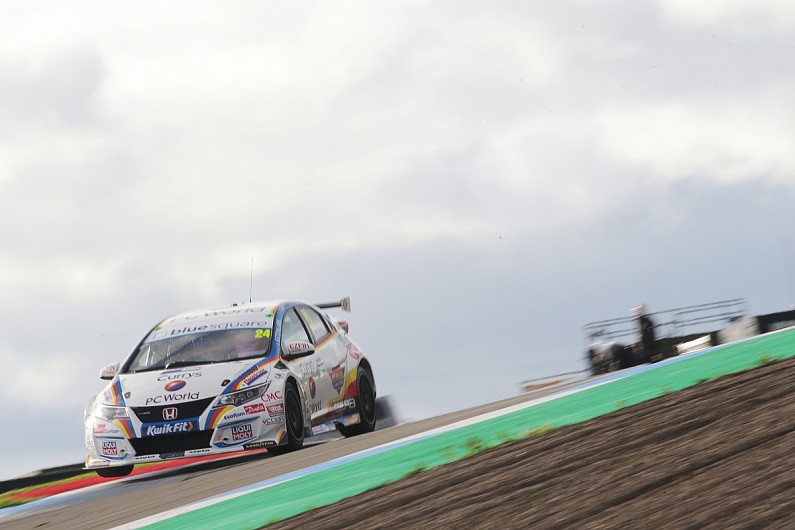 Championship leader Colin Turkington, carrying the maximum 60kg of ballast, put his West Surrey Racing-run BMW 330i M Sport third on the grid with a lap set moments before the red flag appeared.

Turkington will share the second row with the Dynamics Honda of Dan Cammish, who is on 36kg of ballast, and did not take to the track after the red-flag stoppage.

Tom Ingram was quickest after the first runs at the wheel of his Speedworks Motorsport-run Toyota Corolla, but did not improve after that.

That was partly because of a massive moment at the chicane on the lap after his best, which so nearly provided an accident similar to that suffered by Neal shortly afterwards, so Ingram will start fifth.

Joining him on the third row is the Motorbase Performance Ford Focus ST of Rory Butcher.

Butcher, whose family owns and runs the circuit and who set pole last year in the Honda now driven by Hill, could not replicate his Brands Hatch and Oulton Park poles with 48kg on board the new fourth-generation Focus.

Mike Bushell, who holds the lap record thanks to his cameo performance in the AmD Honda last year, continued his impressive day to take seventh in the Power Maxed Vauxhall Astra, while Aiden Moffat improved on the final lap to go eighth at his local circuit in the second LTR Infiniti.

Neal should have been eighth, but his fastest lap was deleted for causing the red flag, and his second best put him ninth.

The accident was triggered when Neal dropped the left-rear wheel onto the grass exiting the chicane, before spinning across the track and smashing into the inside barrier with the right-front.

Tom Oliphant, in the second WSR BMW, claimed the final spot in the top 10 by dint of recording his 50.934s best before BTC Racing Honda man Josh Cook did exactly the same time.