Jake Hill and Ash Sutton topped the two free practice sessions for the British Touring Car Championship round at Knockhill.

Hill's time from the opening period in his Mark Blundell Motorsport Honda Civic Type R remained unbeaten in the lunchtime period, meaning that he emerged fastest from free practice for the second time in four rounds this season.

The Kent racer has had numerous engine dramas in 2020, meaning that he is outside the top 10 in the championship and is carrying no success ballast on the old-spec FK2 Civic.

"All of our Saturdays have been very good so far in 2020," said Hill, who was fastest by 0.247 seconds in the opening session.

"Luckily the car's handling brilliantly, and I'm feeling at home in the car.

"And with some of the engine issues we've had, it's good for us that it's colder here."

Hill, who scored his maiden BTCC win at Knockhill in 2019, focused on race runs in the second session, and put in a very consistent 17-lap stint that bodes well for race pace.

Sutton, who in contrast to Hill has tended to struggle on Saturdays this season, is carrying 54kg of success ballast on the Laser Tools Racing Infiniti Q50, but that did not stop him from topping the second period.

The rear-wheel-drive machine was fifth in the opening session, although second on theoretical bests, and Sutton was able to keep Tom Ingram at bay by 0.128s later on. 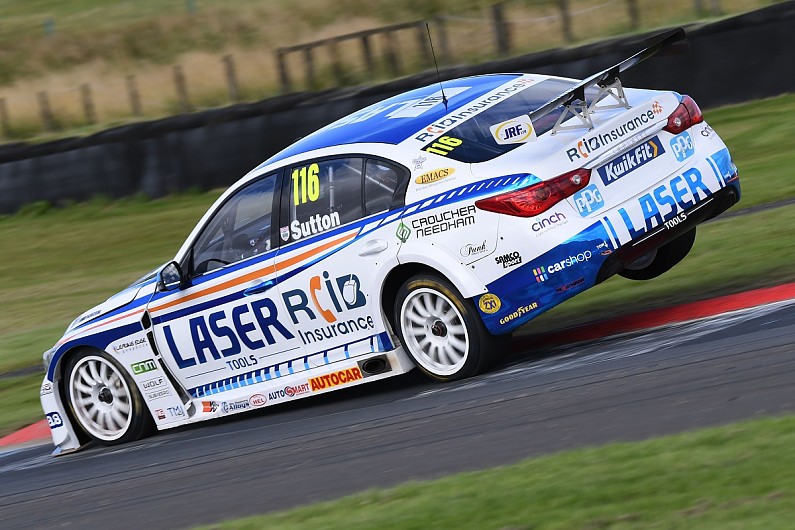 That was despite a rear toe-link breakage towards the end of the session, which resulted in Sutton parking the Infiniti on the grass.

Ingram's time was good enough for third overall in the Speedworks Motorsport-run Toyota Corolla, although he missed most of the first half of the second session due to a gearbox leak.

Driveshaft failure in the final race last time out at Oulton Park has relegated Ingram to sixth in the points, so he is carrying 30kg of ballast, making him one of the favourites for success at Knockhill.

Season latecomer Mike Bushell was in the top three in both sessions with the Power Maxed Racing Vauxhall Astra to take an impressive fourth fastest overall, just 0.001s clear of the leading West Surrey Racing-run BMW 330i M Sport of Tom Oliphant, who is on 42kg of ballast after his strong start to the season.

While Sutton was concentrating on shorter runs in the second session, his LTR Infiniti team-mate Aiden Moffat racked up the miles on longer stints, and the Scot ended up an encouraging sixth overall on his local track.

Next up were the Ciceley Motorsport Mercedes of Adam Morgan and Excelr8 Motorsport Hyundai of Senna Proctor, before championship leader Colin Turkington - carrying the full 60kg of ballast - in ninth spot with the other WSR BMW.

Completing the top 10 was the older-model BMW 125i M Sport of Team Parker Racing's Stephen Jelley, despite a spin coming out of Clark Corner.

Of the other leading title contenders, Dan Cammish was 11th overall in his Team Dynamics-run Honda, and Rory Butcher 13th in his Motorbase Performance Ford Focus.

There was one red flag, when James Gornall spun his Trade Price Cars Racing Audi into the gravel at Clark midway through the second session.

Two of the Team Hard Volkswagen CCs are missing from action this weekend following the race-halting crash at Oulton Park last weekend.

Nicolas Hamilton's car is sidelined by chassis damage, while team-mate Ollie Brown sustained a hairline rib fracture in the impact.