After his race one success, Turkington has already doubled his tally of wins over his successful 2018 campaign courtesy of two well-executed safety car restarts.

The WSR BMW 330i M Sport driving polesitter made a great start to lead into Redgate as a sluggish run for Ashley Sutton from second on the grid left his BMR Subaru open to attack.

Turkington's team-mate Tom Oliphant's good launch took him past the Levorg driver but Sutton responded with an incisive move down the inside of Oliphant at the Old Hairpin to regain the place.

That allowed Turkington to stretch an early lead of eight tenths of a second as a delayed Oliphant held back Neal and his Team Dynamics stablemate Dan Cammish - who was then handed a drivethrough penalty for being out of place at the start.

The race was neutralised by a safety car when ex-Formula 1 driver Mark Blundell ran into the back of MG6 driver Sam Osborne to send them both across the grass and into the gravel at the chicane.

Turkington made a characteristic early restart, overcoming his maximum 54kg load of success ballast to pull sixth tenths on Sutton by the startline.

After initially struggling following his contact with Sutton, Oliphant emerged stronger after the pause and was able to challenge the 2017 champion.

But an attempted pass at McLeans sent him wide on the grass, giving Neal and Motorbase's Tom Chilton a free positon.

While Sutton had fallen back and had to defend from Oliphant, Turkington was more than two seconds to the good when another safety car was called.

BTC Racing's Chris Smiley suffered suspension failure on his Honda Civic Type R heading down the Craners and he ended up in the gravel at Old Hairpin.

Again Turkington made an early run and, with the BMW's strong straightline speed, gained 0.5s on Sutton at the restart and from there he again found a two second advantage, which he held to the flag. 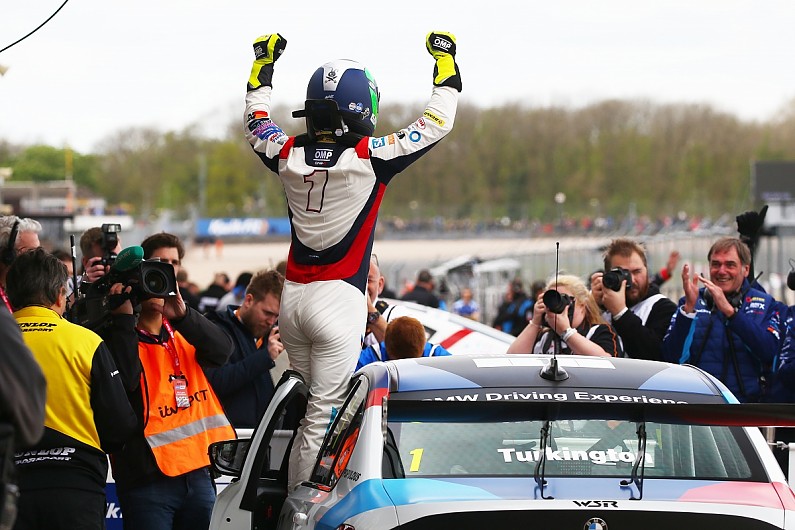 Neal marked the 20th anniversary of his £250,000 first BTCC win by passing Sutton late on for second as Chilton completed the podium from Rory Butcher.

Despite starting 24th after a race one collision with Sam Tordoff, without ballast and on soft tyres Josh Cook enjoyed a rise up the order.

But an ambitious run up the inside of Oliphant into Redgate spun the BMW driver and dropped Cook behind the Vauxhall Astras of Jason Plato and Rob Collard.

Jake Hill was another climber, having started last and finished ninth in his Audi S3 ahead of Speedworks driver Tom Ingram - who was then drawn on reverse grid pole for race three.

After suffering a big crash in race one, Morgan's hastily repaired Mercedes A-Class crossed the line 12th ahead of Cammish.