Thompson completed a late deal to join the WTCR grid in a third Munnich Motorsport Civic in place of team owner Rene Munnich, and is currently set for the opening five rounds.

He made the second part of qualifying in the Sunday sessions at Marrakech and the Hungaroring, has three points finishes from the opening six races and sits 11th in the points.

While he said his return after a season out had gone "as well as could have been expected", Thompson added he was struggling to "get his head round" the Civic's electronic paddleshift system.

"I never drive simulators or games on the Playstation. As good as they are, they're not my thing.

"So the electronic gearbox is just a nightmare for me, because I keep changing down.

"It's quite a specific style, because I like to use the engine braking in a certain way and quite a lot in some of the slower corners.

"Having had so many years of doing that, going to the electronics which don't allow you to do that, especially in the lower gears, was a real struggle.

"I don't think I've managed to do two laps without having issues. And I don't mean one issue, I mean a couple of times. It's always trying to get down the gearbox.

"That's something I've got to learn with mileage, so I'm definitely not driving anywhere near 100% yet.

"At least I know there's a fair bit of room for improvement because if you can't get that right, you can't get your downshift and your preparation for the corner correct [and] effectively you're making a mistake every time that happens on the lap."

Thompson said his one day in the car at the Barcelona media launch event was his first "proper" day of testing since 2008. He completed significantly less pre-season mileage than the rest of the field. 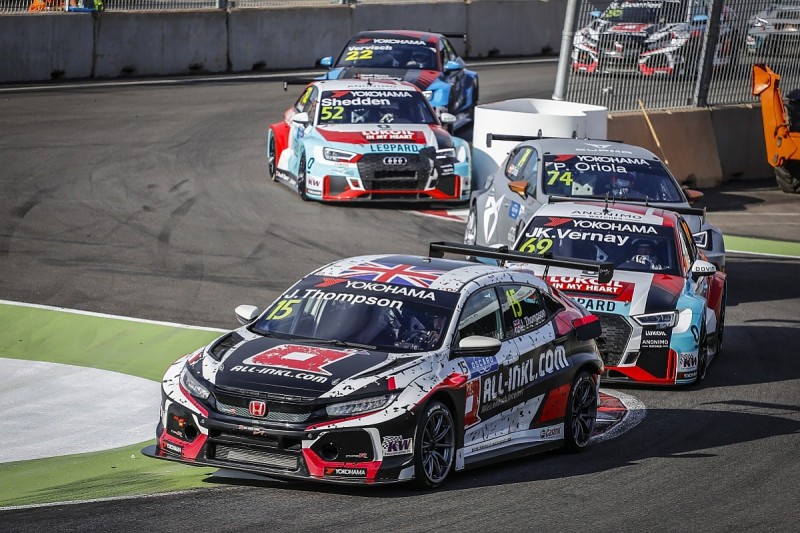 The 44-year-old double British Touring Car champion had reservations about his performance before the first round of the season, but that his Marrakech weekend - where he qualified between team-mates Esteban Guerrieri and Yann Ehrlacher on Saturday and Sunday and scored a best finish of sixth - had given him a "good lift".

"My confidence is bound to be low on the back of the last few years," he said.

"The racecraft and whatnot, you don't really lose that, but speed's something that possibly you might question whether you really want to do it.

"But these guys [Guerrieri and Ehrlacher] are a couple of the best around, so to slot in like that was pleasing.

"What was nice for me was how pleased and surprised everybody was.

"I think everybody had reservations about me arriving so late and with the field being as competitive as it was. I was the same."