Gabriele Tarquini clinched his third win from six races at the start of the World Touring Car Cup season, resisting Norbert Michelisz in the final race of the Hungaroring weekend

From second on the grid, Tarquini beat his polesitting BRC Racing team-mate Michelisz at the start of a race that included a stoppage induced by the arrival of rain, and held off a spirited pursuit from the sister Hyundai in the closing laps to win.

It marks the first time since 2010 that one-time world champion Tarquini has won three World Touring Car races in a season.

With grey clouds gathering at the start of the race, Tarquini got the jump on Michelisz off the line to lead into Turn 1 and held his team-mate at bay.

The pair led the way early on from the Munnich Motorsport Honda Civic of Esteban Guerrieri, who was handed a drive-through penalty for jumping the start, before a safety car was called at the end of the second lap with Aurelien Panis's Audi stuck at Turn 3 with broken suspension.

Michelisz was told just before a lap five restart not to attack Tarquini, a message he acknowledged, and the pair remained line astern ahead of Yvan Muller, who was promoted to third after Guerrieri served his penalty.

The race was then stopped on lap eight when spots of rain briefly intensified, but those drops had started to become less frequent by the time cars returned to the grid to have the chance to have wets fitted.

The rain had stopped by the time the race resumed - with a lap counted back and two added to the original 15-lap distance - under the safety car, meaning all runners opted to remain on slicks. 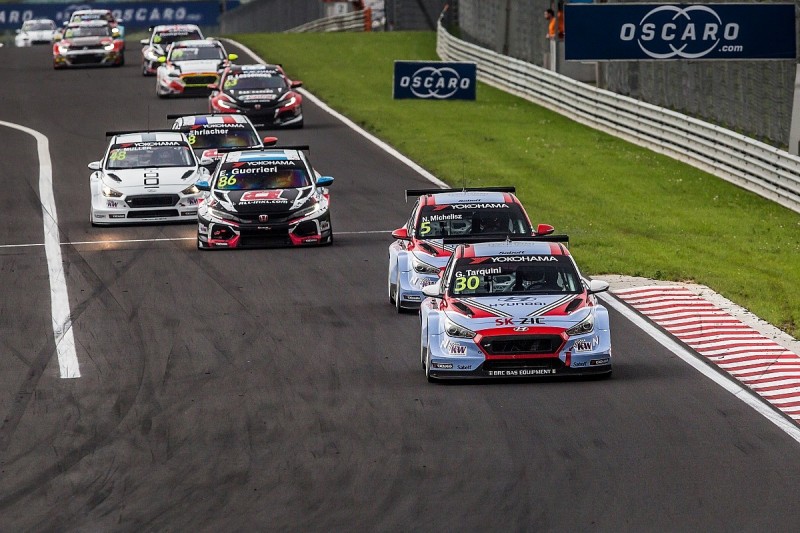 Tarquini got a jump on Michelisz on the restart, but the Hungarian moved back in on his team-mate in the second half of the race and began to pile on the pressure.

But despite running within four tenths of a second of Tarquini on each of the final three laps, Michelisz cold not force the Italian into a mistake and had to settle for runner-up spot, finishing 0.354 seconds behind Tarquini.

Benjamin Lessennes converted his place at the head of row three on the grid into a fifth place finish in his Boutsen Ginion Civic, ahead of reversed-grid race runner-up Daniel Nagy (M1RA Hyundai i30 N).

Rob Huff had got alongside James Thompson for seventh just as the race was red flagged, but dropped away from the second Munnich Motorsport car after the restart as he defended from a charging Thed Bjork.

In the second YMR Hyundai, Bjork started the race from 18th but had made his way up to 12th by the end of the first lap and picked his way through the field thereafter to salvage a handful of points.