Muller was the most decorated champion in the WTCC's previous guise with 48 victories, but retired at the end of the 2016 season after a three-year spell with Citroen at the same time the manufacturer ended its programme.

He took up a role with Volvo as development driver and senior advisor for the Polestar-run WTCC outfit last year, and returned to racing for the final round of the season in Qatar to support the team's successful title bids that included Bjork beating Honda's Norbert Michelisz to the drivers' crown.

The 48-year-old has now reversed his retirement decision fully for the first season of the new WTCR world cup, and will race a Hyundai i30 N TCR for his own Yvan Muller Racing outfit alongside Bjork (pictured together below).

"I had announced my sporting retirement at the end of 2016 and coming back as a full-time driver was not part of my initial plans, but it was necessary for me to see through this exciting project in the brand new WTCR championship," Muller, the 2008, '10, '11 and '13 WTCC champion, told Autosport.

"I'm here above all to support the YMR team and Thed's campaign." 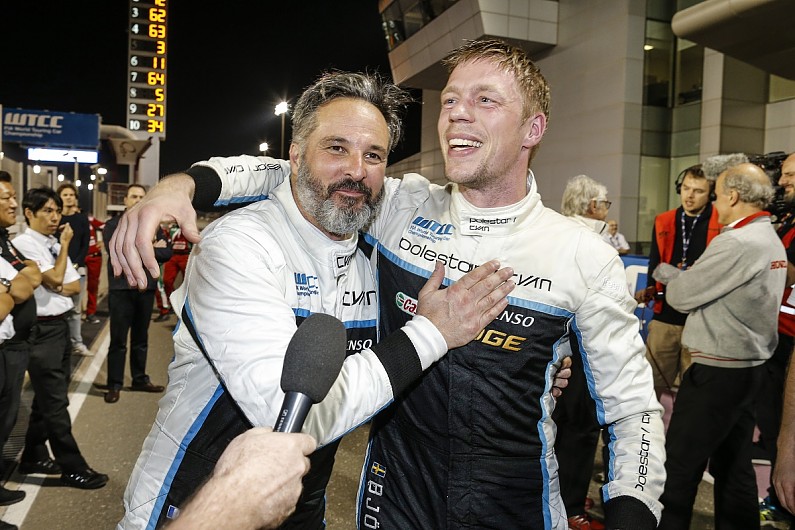 "For Yvan Muller Racing, it's a new step, with a brand-new championship and a very busy year ahead, with an organisation to set up - for the first time, we'll be present in national, European and global competitions.

"It won't be easy, but it should make for a very interesting challenge and we will do our utmost to rise up to it."

Bjork added: "I am excited to be back for the 2018 season, especially with Yvan - we had a great cooperation last year.

"To race together with him in the new regulations is truly motivating and inspiring.

"We have a lot of new things to learn and the competition is hard, but my goal is always to win."

YMR also runs cars in the LMP3 division of the Le Mans Cup and will run a pair of Mercedes-AMG GT4s in the GT4 European Series Southern Cup (French GT Championship).

It is yet to take delivery of its two Hyundais for the WTCR world cup.