Muller started the race from pole and converted that into an early lead, while Norbert Michelisz moved to tuck in behind the Lynk & Co 03 and also repel any chance of attack from third-place starter Priaulx.

After pulling out a lead of 1.122 seconds on the opening lap, Muller spent the remaining seven laps with under a second in hand over Michelisz but was never threatened by the BRC Racing Hyundai driver in a tame first WTCR race of the weekend.

A third victory of the season elevates Lynk & Co driver Muller above Cyan team-mate Thed Bjork for third in the championship standings, in which he is 36 points behind new leader Michelisz.

Muller should have led a Cyan 1-3 on the podium, until Priaulx moved over out of Fisherman's Bend on the final lap to boost Bjork's place in the order.

The final spot on the podium instead went to the Alfa Romeo Giulietta of Kevin Ceccon, who made a sluggish getaway but was boosted in the order by both Priaulx and Yann Ehrlacher deliberately dropping back. 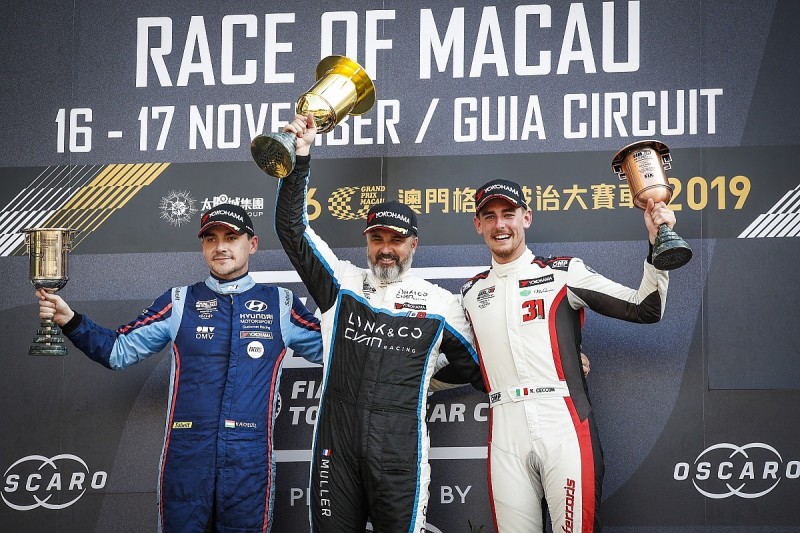 Rob Huff was fourth in his Sebastien Loeb Racing Volkswagen Golf GTI ahead of Bjork, with Priaulx sixth over the line after fending off Frederic Vervisch's efforts to capitalise on his moving over.

Ehrlacher, who had pulled the same team move as Priaulx early on in the race, was eighth in the fourth Lynk & Co 03, while the BRC Hyundais of defending champion Gabriele Tarquini and Nicky Catsburg completed the top 10.

Robert Dahlgren scored points in his first race back in World Touring Cars, finishing 13th for the PWR Cupra team. The sole remaining wildcard in the field Billy Lo was the last driver to finish on the lead lap in 23rd.

The Argentinian started the race from the back of the grid due to an engine change after first qualifying and, though he made some progress through the field, he lost a lap when he stopped in the pits and was classified 25th.

He was due to start Sunday's reversed-grid race from pole, but was handed a three-place grid penalty on Friday evening for an altercation with Catsburg.