Ehrlacher - the nephew of four-time WTCC champion Yvan Muller - started the race from pole in his privateer Lada Vesta, and although he was passed by Sebastien Loeb Racing driver Tom Chilton on the opening lap, Chilton was adjudged to have done so illegally and had five seconds added to his time at the flag.

Chilton got the better of the starts at the beginning of the race but RC Motorsport driver Ehrlacher was quick to swoop across and block off the inside line to hold a lead.

Ehrlacher looked to have defended that advantage on the long back straight, but Chilton darted to the outside in his Citroen C-Elysee before cutting back for the tight Turn 5 hairpin, biffing the Lada up its rear before snatching the lead as Ehrlacher squealed wide.

Chilton's SLR team-mate Mehdi Bennani looked as though he might take advantage of Ehrlacher's delay to claim second, but Frenchman Ehrlacher hung on gamely around the outside of the Turn 7 right-hander to keep hold of the place. 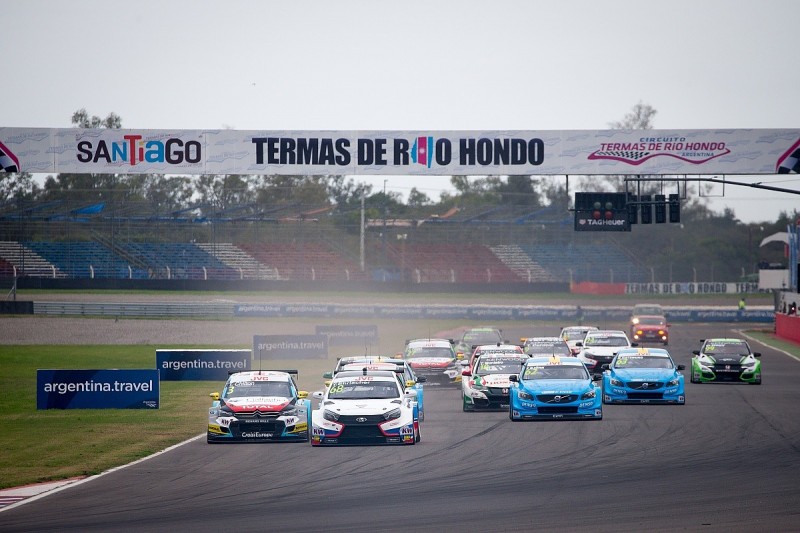 Ehrlacher stabilised his pace thereafter and stayed within three seconds of the leading C-Elysee, before Chilton was slapped with a five-second penalty for his move for the lead with three laps to go.

While he tried desperately to extend his lead in the closing laps, Chilton could only eke out a 3.427s gap to Ehrlacher, who gratefully inherited a first victory in the series.

Championship leader Tiago Monteiro was told by his Honda team to push on the final lap because of Chilton's penalty but was eventually classified 0.104s behind the Briton, ahead of the sole surviving Volvo S60 Polestar of nearest title challenger Thed Bjork.

All three Volvo drivers had scruffy races, with Bjork forfeiting the chance to make up points on Monteiro with an ill-judged attempt to pass Guerrieri before being pushed out wide and dropping behind Monteiro.

He inherited a place back in the order when team-mate and main race polesitter Nicky Catsburg suffered a left-front puncture while running fifth.

Catsburg made it back to the pits but retired from the race, while Nestor Girolami stopped the third S60 Polestar in the final sector of the lap with a suspected transmission problem.

Rob Huff advanced from 12th to seventh in his Munnich Motorsport C-Elysee having been eliminated in the first part of qualifying a day earlier, finishing ahead of John Filippi.

Tom Coronel and Ryo Michigami - from the back of the grid - completed the points.

The third Honda Civic of Norbert Michelisz finished 14th and last of those to complete the race after picking up a puncture in a first-lap touch with team-mate Monteiro.