Lappi - the reigning WRC2 champion - took the lead of the event on Saturday when team-mate Jari-Matti Latvala retired with an ECU failure on his Toyota Yaris WRC.

Latvala had started to pull away from Lappi over Saturday's stages and the gap was up to 8.5 seconds when he retired on Ouninpohja, leaving Lappi and co-driver Janne Ferm to manage a lead of nearly a minute over an epic battle for second place.

There was more drama near the finish as Lappi took a chunk out of the rim on the rear of his Yaris on the penultimate stage but he held on to win by 36s.

The tight battle for second was decided on the powerstage when Elfyn Evans overturned a 0.9s deficit to Lappi's team-mate Juho Hanninen to deny Toyota's Finnish driver a home one-two.

Evans had struggled on Friday, but plugged away and brought his DMACK Ford Fiesta WRC back into contention.

M-Sport's rookie Teemu Suninen had held second going onto the penultimate stage but went wide into a ditch, hit a bank and spun.

Still, he held on for fourth in only his second event in a 2017 WRC car. 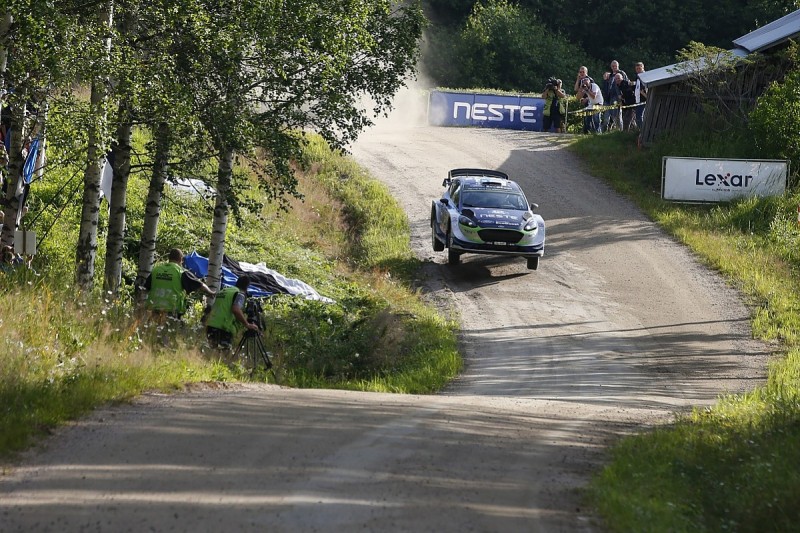 Craig Breen was once again the highest-placed Citroen C3 WRC, with the team struggling on an event where last year it finished first and third with Kris Meeke and Breen.

Thierry Neuville took sixth overall but thanks to that and third place on the powerstage he draws level with Sebastien Ogier at the head of the World Rally Championship standings and leads on countback.

A heavy jump broke the suspension on Ogier's Fiesta on Friday morning, and shortly afterwards he went off and hit a tree on co-driver Julien Ingrassia's side - leaving Ingrassia concussed and ending their weekend.

Ott Tanak in the final M-Sport car had led on Friday but hit a rock and damaged a wheel.

His fightback took him to seventh, and more importantly, a powerstage win that helped team-mate Ogier's title hopes by taking points off Neuville.

Kris Meeke struggled for confidence throughout and his win last year felt a very long time ago.

He took eighth behind Tanak, heading an off-the-pace Dani Sordo.

Mads Ostberg rounded out the top 10, having been as high as third before problems and incidents.

Finn Jari Huttunen produced one of the drives of the weekend to win on his WRC2 debut in his Skoda Fabia, just his second event in an R5 car.

The European championship junior won by over two minutes, and even led the likes of former M-Sport WRC driver Eric Camilli, who was in an R5 car but not registered for points, in the overall order.