Thierry Neuville leads for Hyundai at the end of day two at Rally Turkey, delivering searing stage times as he bids to stay in the World Rally Championship title fight

Overnight leader Sebastien Loeb rolled the dice by putting two medium compound tyres on his Hyundai i20 WRC for the opening stage of the day and paid a heavy price as the softer rubber failed to endure the rock-strewn surface.

Loeb's struggle to recapture lost time could not compare with that of his Hyundai team-mate Ott Tanak, however, who suffered a steering failure mid-way through the same stage and went out of the event.

WRC points leader Sebastien Ogier capitalised for Toyota, winning the first two stages of the day and taking the overall lead of the event. Neuville, who had been complaining about his car's performance on the opening tests, then attacked on the final stage of the morning loop and was able to peg the Frenchman's advantage back to just 1.6 seconds.

The lead battle between Ogier and Neuville pulled clear of a three-car battle for third between Loeb and the Toyotas of Elfyn Evans and Kalle Rovanpera, in which tyre management was the primary concern over outright pace.

Evans was content to drive at nine-tenths and his consistency kept him in front of the podium battle for much of the day, while still more drama unfolded after spectators made their way out into the countryside.

Due to COVID-19 measures, Rally Turkey is officially taking place without spectators even though large gatherings can be seen in the hills looking down on certain sections of the route. Some individuals tried to get a closer look and were caught out by the FIA's new safety protocols but the delay was relatively short-lived.

The afternoon loop brought further drama as Ogier began to suffer transmission issues and a puncture while Neuville hustled a Hyundai that was much more to his liking to claim an advantage of almost 22s. 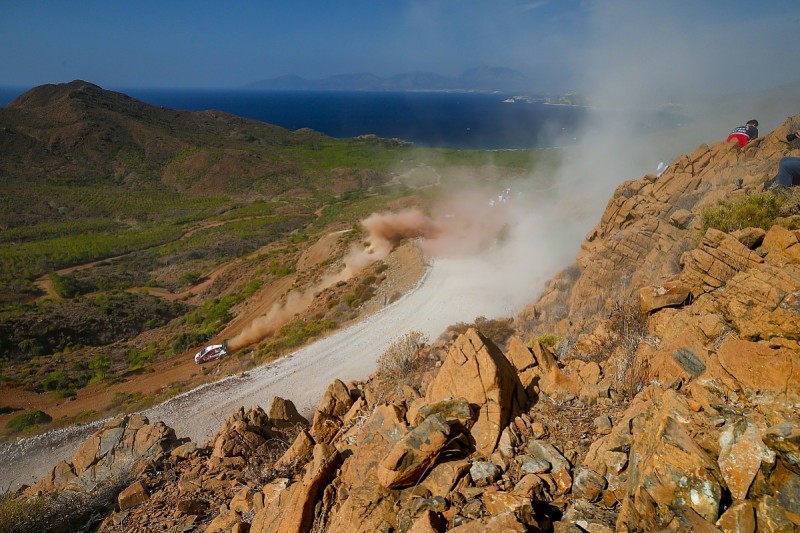 Ogier was back on the pace for the next stage and surrendered just 0.2s to the Belgian, who then accelerated to end the day with a 33.2s lead to take into the final day.

"We worked on the set-up and I must say I was much more happy with the car this afternoon, especially in the rough sections, we were able to get what we were looking for," Neuville said.

"Maybe not 100% yet but anyhow we went in the right direction so the engineer was pushing me for some changes and finally it worked well so I'm happy with that and pleased with the job that the team has done."

Loeb also got back on the pace and beat Neuville to win the final stage of the day by 0.9s, equalling Ogier's overall time for the event and sharing second place with his former nemesis on the overnight leaderboard.

Four stages remain on the itinerary for the closing day of the rally and both Neuville and Hyundai's team principal Andrea Adamo must hope that Loeb can edge in front of Ogier's Toyota to maximise the manufacturer and driver points advantage.

"Obviously nothing is done, tomorrow is the roughest stage of the rally," said Neuville. "I mean, we have seen Ogier getting a puncture close to the end of the stage so he continue pushing and he's still in P2. I'm going to try to do my best tomorrow and hopefully we're going to survive."

Tanak "pretty sure" he will restart Rally Turkey after steering issue