Mikkelsen and Lappi headed to the first running of the Likenas stage tied for second overall, almost a minute behind runaway leader Tanak's Toyota.

But a poor run to the 10th fastest time on the first of two passes demoted Mikkelsen from equal second to fourth, as he also fell behind his Hyundai team-mate Thierry Neuville.

Lappi was fastest of the sparring trio on both runs through Likenas, boosting his advantage over Neuville to 4.4 seconds overall ahead of the powerstage.

Mikkelsen, complaining that his car was not "reactive" enough to match the pace of Lappi's Citroen and his own team-mate, is now 4.2s off Neuville and falling towards Elfyn Evans in fifth place.

Evans was fastest through the second running of Likenas, reducing the gap between himself and Mikkelsen to 6.4s with only the Torsby finale to go.

Toyota's Kris Meeke had been under pressure from Sebastien Loeb for sixth place on Saturday afternoon but extended his gap, going 7.6s quicker than the Hyundai driver across both runs of Likenas to boost his overall advantage to 9.2s.

Pontus Tidemand is over a minute and a half behind Loeb in eighth, though he is well clear of ninth-placed WRC2 leader Ole Christian Veiby. 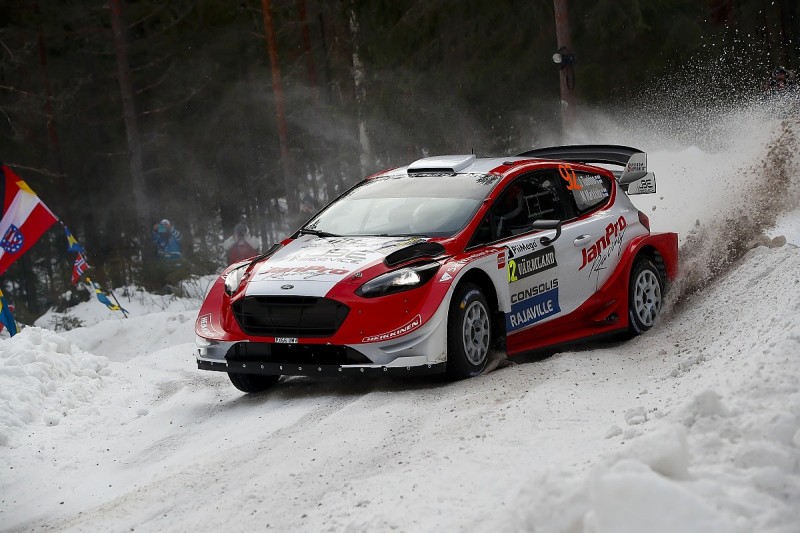 Jari Huttunen had been in 10th overall and closing in rapidly on Veiby for the lead of WRC2, but hit trouble on the second run of Likenas and dropped out of contention.

Friday retiree Jari-Matti Latvala, running as third car on the road, set the fastest time on the first run though Likenas, 0.2s ahead of Sebastien Ogier who started one place earlier in the running order.

Ogier deliberately drove at a slow pace through his next run, saving his tyres for an attempt at maximum points on the rally-ending Torsby power stage.

Teemu Suninen also returned to action after hitting a tree on Saturday and damaging the rollcage on his Ford Fiesta.

His M-Sport team was able to repair the damage and have it recertified, thanks to being the manufacturer of its own rollcages.

Follow the deciding stage as it happens with Autosport Live from 11.15am UK time