Esapekka Lappi currently holds a 0.1-second lead over his World Rally Championship rivals on Rally Mexico, but the opening Guanajuato superspecial was curtailed early due to a damaged jump

An aggressively angled artificial jump was placed by organisers just before the flying finish of the 0.7 mile city sprint, but several drivers had violent nose-heavy landings as they went over it.

Lappi was among the most aggressive drivers over said jump, landing heavily on the front left corner of his Citroen C3.

Kris Meeke, who was fastest through the earlier Shakedown test, had successfully taken the jump at a much reduced speed immediately after Lappi.

But the stage was cancelled thereafter due to concerns over the jump's condition.

This meant championship frontrunners Ott Tanak, Thierry Neuville and Sebastien Ogier were not able to start the stage.

Organisers decided to award the trio a notional time based on Meeke's run, as he had been the last driver through before the stoppage. 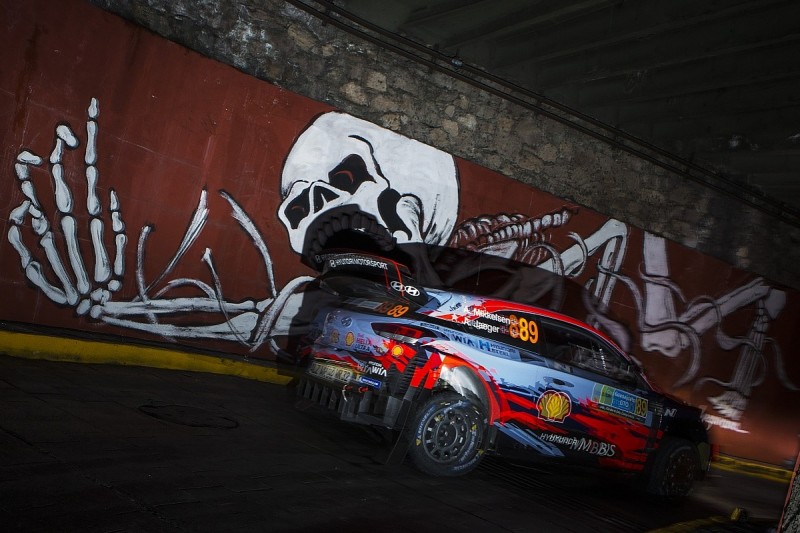 Hyundai's Andreas Mikkelsen, who had sustained a similarly lairy front-left heavy landing over the same jump to Lappi, is currently 0.1s behind the Finn in second place.

Despite slowing heavily on the approach to the jump, Meeke was still third fastest, 0.6s off Lappi's time and tied with Elfyn Evans and those who didn't run.

Evans's M-Sport team-mate Teemu Suninen and Dani Sordo - who is making his first WRC appearance this year in place of Sebastien Loeb at Hyundai - were equal fifth quickest.

A furious Jari-Matti Latvala was seventh fastest, only 0.2s slower than Suninen and Sordo but aggrieved at a mix-up in his pace notes.

Latvala and co-driver Miikka Antilla had marked the stage finish where the penultimate set of yellow marker boards were located, rather than the flying finish location a few metres further down the road.