Andreas Mikkelsen and Esapekka Lappi are tied for second place on Rally Sweden behind Ott Tanak with three stages remaining, with Thierry Neuville only 2.3 seconds behind them in fourth

The main focus was Mikkelsen, Lappi and Neuville's battle over second place, with Lappi 1.9s behind in fourth and Neuville 4.5s off his Hyundai team-mate after the afternoon rerun of Saturday morning's three stages.

Citroen driver Lappi carved 1.5s out of Mikkelsen's advantage on the Karlstad superspecial and then won back another 0.4s through Torsby Sprint, leaving the pair dead level, both 54.5s behind Tanak's Toyota. 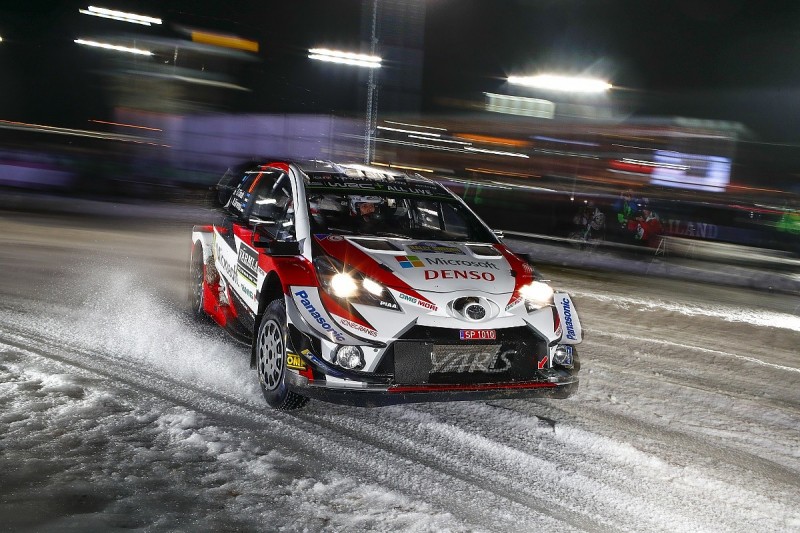 Hovering close behind, Neuville won the day-ending Torsby Sprint, taking over a second out of Mikkelsen on each of the two short tests to finish 2.3s behind the tied pair.

Elfyn Evans lost four seconds to Neuville across those two stages, casting him further adrift of the podium battle that he had been part of this morning. He remains fifth, 11.9s off Neuville.

A battle for sixth between Kris Meeke and Sebastien Loeb had looked set to go Loeb's way based on his pace earlier in the afternoon, and they headed to the pair of superspecials separated by only 0.5s.

A strong run from Meeke opened that gap up, though Loeb claimed half a second back on Torsby Sprint to finish the day 1.6s adrift of Meeke in seventh. Pontus Tidemand continues to hold eighth place.