Ogier took charge of the second half of a rally that had begun wide open through its first leg and ended up winning by 15.6 seconds over title rival Thierry Neuville's Hyundai.

Leg one had featured six different rally leaders in as many stages and a point where eight cars were within 8.9 seconds in a constantly fluctuating battle up front.

That began to break up on Friday afternoon, when Jari-Matti Latvala rolled his Toyota while second, Kris Meeke broke his Citroen's suspension while pushing to get back into the lead and Hayden Paddon's Hyundai was stopped by an electrical glitch for 11 minutes while a close third.

Ott Tanak emerged from that chaos in the lead, despite slightly damaging his M-Sport Ford on Friday'spenultimate full-length stage.

Ogier had been as low as eighth while running first on the road, but started making progress through Fridayafternoon.

A stage win on Saturday's opener brought him up to second and to within 1.1s of his rally-leading team-mate.

Tanak immediately fought back with a blistering time on the next stage that brought his lead back up to six seconds, but then on the stage after that he broke his Fiesta's rear suspension and tumbled out of victory contention.

That left Ogier free to control the rest of the event. 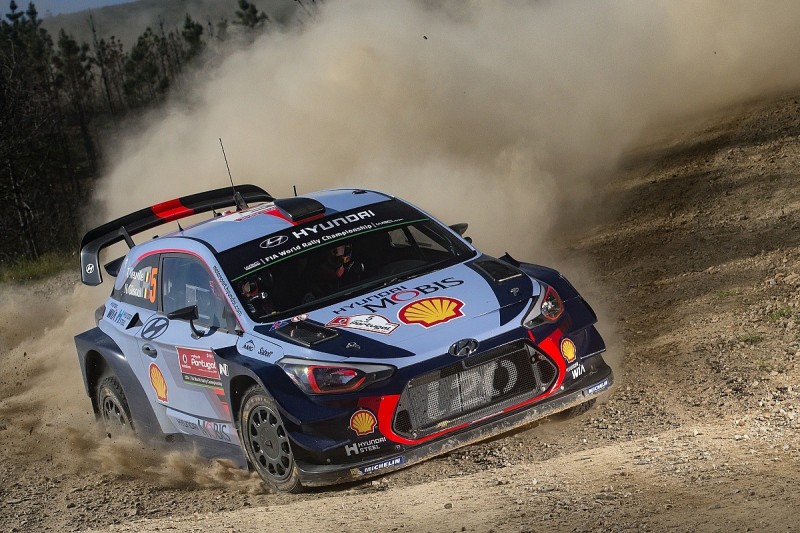 Neuville made his way through to second ahead of Hyundai team-mate Dani Sordo despite initially struggling with his smooth driving style on a rally that favoured a more sideways approach.

That left him a baffled 12th on Friday morning before he adjusted his approach and regained ground.

Tanak recovered to fourth - and secured three bonus points for the fastest time on the Powerstage - ahead of Craig Breen, who was in the lead fight before breaking a damper in his Citroen on Friday afternoon.

Elfyn Evans was also in the thick of things early on, before two punctures - one of which he readily admitted he caused by going off the road - consigned him to sixth.

Evans was not the only DMACK World Rally Car runner this time as Mads Ostberg made an eleventh-hour switch for his privately-entered Ford.

A puncture dropped Ostberg back on Friday and he finished eighth.

Toyota's first event with a three-car line-up brought seventh, ninth and 10th with Juho Hanninen, the delayed Latvala and Esapekka Lappi on his first start for the manufacturer.

Newcomer Lappi matched Hanninen's pace for much of the weekend but a holed intercooler, struggling to restart after stalling once and then suspension damage cost him ground.

Meeke and Paddon spent the weekend running well down the order under Rally2 after their Friday dramas, while Stephane Lefebvre was also well outside the points in the third Citroen following a leg one crash.

Andreas Mikkelsen had utterly dominated WRC2 for Skoda and held a lead of more than three minutes, before a roll on the Powerstage gifted victory to his team-mate Pontus Tidemand.