The WRC champion had opened his latest title defence with Monte Carlo and Sweden victories, but then endured months of frustrated fury over the running order regulations that left him first on the road on the subsequent gravel rallies.

The series' return to asphalt for Germany was always expected to be Ogier's chance to get back on top and he duly delivered.

He and co-driver Julien Ingrassia had to overcome Volkswagen team-mate Andreas Mikkelsen first, the Norwegian leading through Friday as Ogier dropped a little time with small errors and less-than-ideal tyre choices.

But a blistering run on the famous Panzerplatte stage on Saturday morning allowed Ogier to break free.

Ogier was the only VW driver on the podium in the champion team's home event and its last before its motorsport boss Jost Capito leaves for the McLaren Formula 1 team.

Jari-Matti Latvala's rally was effectively over immediately due to gearbox damage on Friday's opener, though he rejoined under Rally2 and scored a couple of powerstage bonus points, and Mikkelsen was pushed back to fourth as the Hyundais made a late charge.

Dani Sordo and Thierry Neuville both overcame Mikkelsen with Sunday morning stage wins, leaving the trio covered by just 4.1 seconds as they went onto the deciding powerstage.

A wild stage from Mikkelsen included several moments and ended with his debris-filled left rear wheel on fire and his brakes used up.

That left the fight down to the Hyundais, and though Neuville was fastest on the powerstage a delighted Sordo was able to hang onto second place overall ahead of his team-mate by just 0.1s. 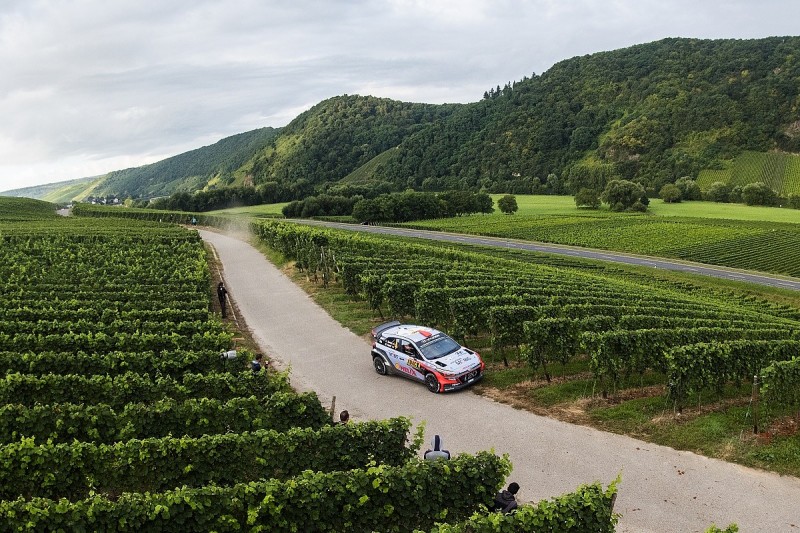 The result was Sordo's first podium of 2016 and his best finish since taking second behind Neuville in Hyundai's breakthrough one-two on this event two years ago.

Third Hyundai driver Hayden Paddon tumbled down the order on Friday with a puncture and a wild moment that he was lucky to prevent turning into a huge crash.

He recovered from eighth to fifth ahead of Mads Ostberg, helped by Ott Tanak losing a comfortable fifth place to a Saturday alternator failure.

M-Sport also lost Eric Camilli early on, the Frenchman crashing on the first stage of what the team expected to be his strongest rally of the year.

The most dramatic retirement was a violent high-speed crash for Stephane Lefebvre on Panzerplatte.

The incident halted the rally and sent both Lefebvre and co-driver Gabin Moreau to hospital with multiple injuries.

Until then, the Citroen protege had been running sixth - his privately-arranged PH Sport entry the only DS 3 WRC presence on this event.

Lappi took control of the class on Saturday after overcoming early leader Armin Kremer. His factory Skoda team-mate Pontus Tidemand was close behind but chose not to register for class points on this rally.