Thierry Neuville leads the 2017 Monte Carlo Rally by just over a half a minute, after Sebastien Ogier and Kris Meeke both went off on Friday morning

Hyundai driver Neuville had ended a first night overshadowed by a spectator fatality in a crash involving his WRC team-mate Hayden Paddon with a seven-second advantage over Ogier's M-Sport Ford.

Ogier then tumbled to ninth place when he slid into a ditch when caught out by the icy conditions under braking on Friday's opener.

His team-mate Ott Tanak stepped up to lead M-Sport's challenge and was fastest on that stage, moving up from fifth place to close behind new second-position man Meeke.

Tanak was poised to get ahead of the Citroen on SS4 even before Meeke went off and broke his suspension, forcing his retirement.

Though Tanak regularly set the pace on split times, despite being distracted by his intercom broadcasting M-Sport's internal radio chat as well as his pace notes, it was Neuville who was fastest overall on SS4 and SS5.

That pulled him 31.7s ahead of Tanak by the time the field headed for the midday service. 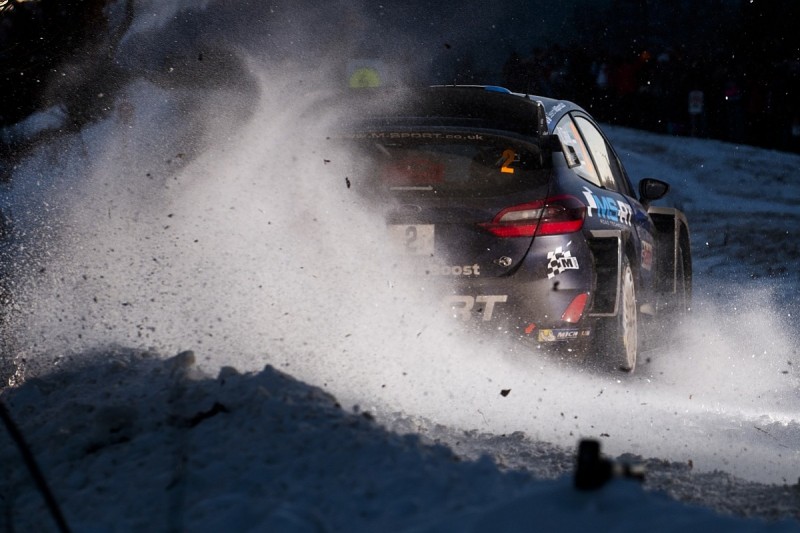 Juho Hanninen initially remained in the podium fight following his shock third place on Thursday evening in the new Toyota.

Though having to drive around Elfyn Evans's off-the-pace DMACK Ford on SS3 cost him ground to Meeke and Tanak, he was back in third place once the Citroen stopped.

But on the morning's final stage it was Hanninen who hit trouble and had to park his Yaris with damage.

That elevated the recovering Ogier into third.

The reigning World Rally champion was right on Neuville and Tanak's pace after his excursion and was back up to fourth just one stage after going off.

He then began to close on Hanninen even before the Toyota's incident, but though Ogier is back in the provisional podium places already he is a minute behind Neuville.

The remaining Toyota of Jari-Matti Latvala runs fourth. Time lost struggling to get the car started before the first stage meant Latvala could not make his planned set-up changes, but he showed encouraging pace as he progressed from his overnight ninth place.

Dani Sordo has been struggling to match team-mate Neuville's performance in fifth, while Citroen's only World Rally Car in contention now is Craig Breen's previous-generation DS3 in sixth after Meeke's incident and Thursday night transmission trouble for Stephane Lefebvre.

Former Volkswagen WRC driver Andreas Mikkelsen is dominating WRC2 on his return to Skoda's works line-up and holds seventh on the outright leaderboard.

Though back in a World Rally Car, Evans finds himself among his 2016 WRC2 opposition in ninth overall.

He lost over two minutes to the frontrunners on both SS3 and SS4 and said there was no problem beyond the DMACK tyres struggling to work on the icy and snowy sections.