Ogier showed his class to turn a 9.9s overnight deficit to Loeb into a 5.4s lead, after winning two of the three morning stages, including a masterful display on the snow and ice of Stage 11.

Loeb was unable to match his countryman in all three stages and after Stage 10 the multiple world champions held identical overall rally times, before Ogier blitzed the final morning test.

M-Sport’s Craig Breen has jumped from sixth to third overall after Evans (Toyota), and the Hyundais of Thierry Neuville and Ott Tanak all encountered issues.

Evans’ podium hopes are over after a mistake on Stage 11, while Neuville suffered a mechanical problem and Tanak suffered two punctures that could end their rallies completely - with no midday service on offer at Monte Carlo.

It has been confirmed that Tanak will not continue following his Stage 11 impact.

Neuville remains fourth overall but the improving Kalle Rovanpera has shot to fifth as Tanak dropped to seventh. M-Sport’s Gus Greensmith, who was seventh, suffered a right rear puncture and misfire in Stage 10, that sent him down the order.

The morning had begun with Evans lighting up the timing screens as the Welshman became the first Toyota driver other than Ogier to claim a fastest time on Stage 9, held in the Monte Carlo hills.

Evans emerged 0.7s faster than teammate Kalle Rovanpera, who enjoyed his best stage performance yet in the new GR Yaris, having struggled to adjust to the new Rally1 cars.

Ogier dropped 3.9s to his teammate admitting he was “fighting” with his car and in particular its hybrid system.

Despite the issues, Ogier left the stage with the gap to rally leader Loeb cut to 6.5s after the latter struggled with understeer from the super soft tyres fitted to the Puma.

It again proved to be a difficult segment of the rally for Hyundai as Neuville claimed it was “impossible” to drive the i20 N, with the Belgian also hampered by a radio issue that meant he could hear the conversations of his teammates during the stage.

On top of Tanak’s left rear puncture that cost him 1m16.8s, Solberg was still battling a lack of confidence with the car and fumes coming into the cockpit area. Hyundai had hoped to fix the issue that caused him to suffer dizzy spells on Friday before action began on Saturday. 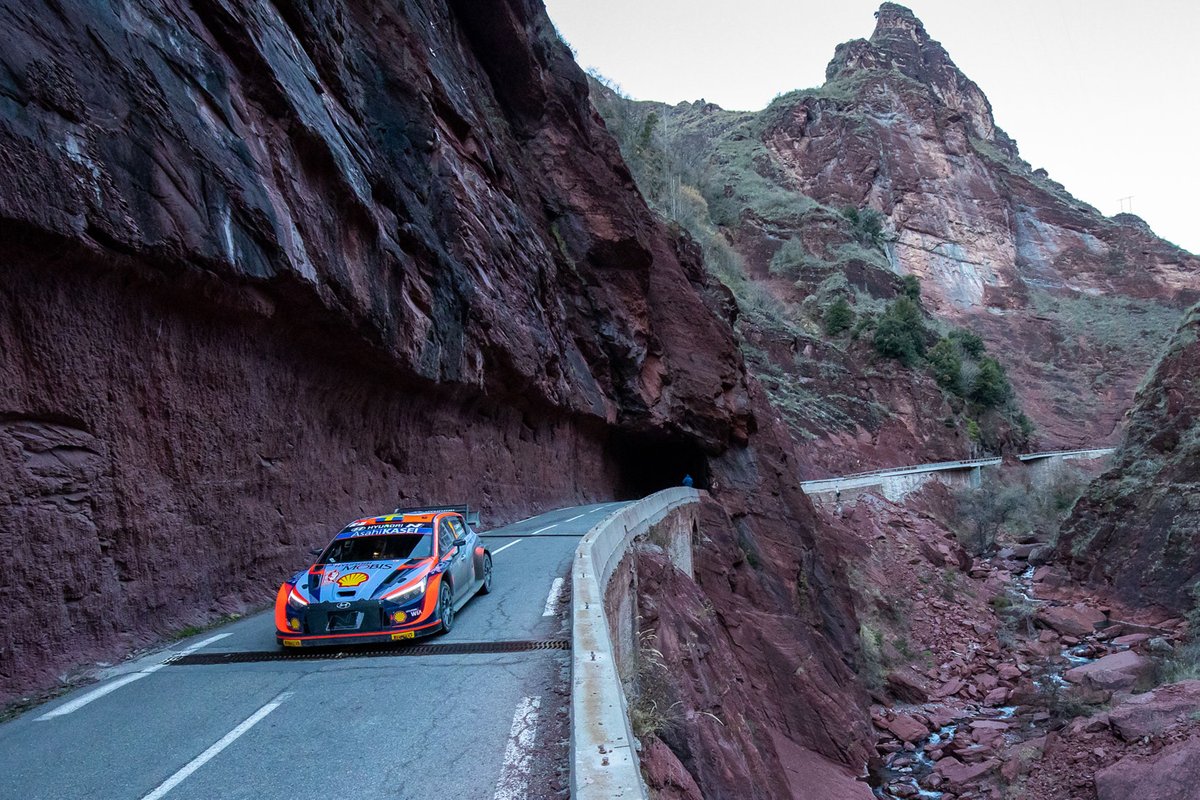 Ogier racked up his fourth stage win of the event in stage 10, taking 6.5s from Loeb to ensure the two WRC legends shared the overall rally lead.

However, Hyundai and M-Sport grabbed the headlines. First, Solberg locked up and ran off the road and down a bank leaving him beached, but luckily without serious damage. The Swede was able to drag the car out and rejoin the stage, reaching the finish 35 minutes behind the leaders, minus a front bumper.

Teammate Neuville also had trouble, checking in to a time control a minute late, incurring a 10s penalty in addition to his mechanical issue.

The final stage of the loop provided the biggest challenge of the rally to date as crews faced a mix of snow, ice and bone-dry tarmac on the Sisteron stage.

Toyota, M-Sport and Solberg ran with a mix of snow or studded tyres and slicks, while Neuville and Tanak gambled on slicks.

The gamble paid off for Toyota and M-Sport but it was Ogier that fared the best, claiming another stage win despite a couple of lucky escapes on the slippery snow that reduced the drivers to a crawl.

Ogier took the stage by 4.5s from Rovanpera with Breen third.

Evans produced a blistering run in the first half of the stage but he clipped a grass bank in the dry section. The resulting spin left his GR Yaris precariously beached on a steep hillside.

He attempted to rejoin, but due to the dangerous nature of the situation marshals red-flagged the stage after Loeb completed the test.

Tanak and Neuville both had moments, the former, the most significant as his i20 skipped across a narrow drop on the inside of a corner, before running into a bank. He would then pick up a slow puncture and is without a spare tyre.

Meanwhile, Neuville was only able to drive at 75% due to a mechanical issue, it is unclear if the pair will be able to complete the final two stages this afternoon.