The 30-year-old Belgian's deal is the first of numerous announcements that will shape the WRC driver market in the coming weeks.

Neuville gave Hyundai its maiden WRC win in Germany in 2014, in his first season at the squad, and has been Sebastien Ogier's main title rival in recent years.

Hyundai made clear retaining Neuville was its priority, and told Autosport a month ago a deal was virtually done.

"I am really happy to sign a new three-year contract with Hyundai Motorsport," said Neuville.

"We have improved a lot in recent seasons and it has always been my target to build continuity for my career by remaining with this team.

"Since 2014, we have shared many special moments together, as well as working through some more difficult times.

"Our debut victory together in 2014 [pictured] remains a highlight, and we have since taken more wins together." 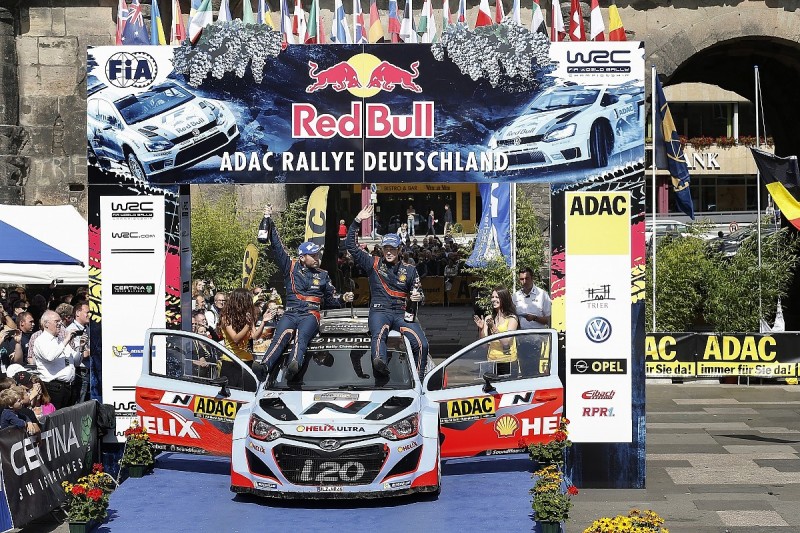 Despite reports of internal strife and discord between the drivers in recent seasons, Neuville said his relationship with team-mates help make his mind up.

"There is a fantastic family atmosphere and I get on very well with my team-mates," he said.

"This is very important to me. Alongside Nicolas [Gilsoul, co-driver], who has played a key role in our successes, our focus is on completing this current season in the strongest way possible, aiming to secure the titles.

"From there, we will continue to build, hopefully, to an even brighter future with Hyundai Motorsport."

Team principal Michel Nandan added: "We are delighted to extend our relationship with Thierry and Nicolas for a further three seasons.

"They have both played a crucial role in building up the Hyundai Motorsport WRC programme over the past five years, helping us to many important milestones along the way from our maiden victory in Germany 2014 right up to our current championship battle."

Neuville's announcement will do little to deflect speculation about Ogier's future with M-Sport.

The reigning champion is expected to make his intentions clear by next weekend, with a move back to Citroen looking increasingly likely according to service park sources.

Of the rest of Hyundai's line-up, Andreas Mikkelsen has an existing contract for next season and the team is known to be keen to extend its agreement for a part programme split between Hayden Paddon and Dani Sordo.

Racing father and son Jan and Kevin Magnussen are to team up again in next month’s Rolex 24 Hours at Daytona in a Porsche 911 GT3 R in the GTD class.