The WRC championship leader produced yet another stunning performance, despite starting first on the road in changeable weather conditions, to beat Evans by 1m00.9s on Estonia’s fast gravel roads.

Evans had dominated the majority of Friday’s stages winning five of the eight tests to open up a 19.9s lead only for Rovanpera and co-driver Jonne Halttunen to begin to reel in the Welshman as intermittent rain showers created treacherous conditions.

Rovanpera surged into the lead on Friday’s final stage, helped by Evans suffering the worst of the heavy rain. However, the Finn elected to push on slippery gravel roads, resulting in a 22.6s swing and the rally lead.

Evans mounted a challenge on Saturday before Rovanpera took control of the rally posting seven consecutive stage wins to move into a healthy lead.

Rovanpera sealed the victory in incredible fashion by beating Evans by 22.5s on the final powerstage, held in desperately wet conditions.

Second place has elevated Evans to third in the championship, following runner-up finishes behind Rovanpera in Portugal and Kenya. 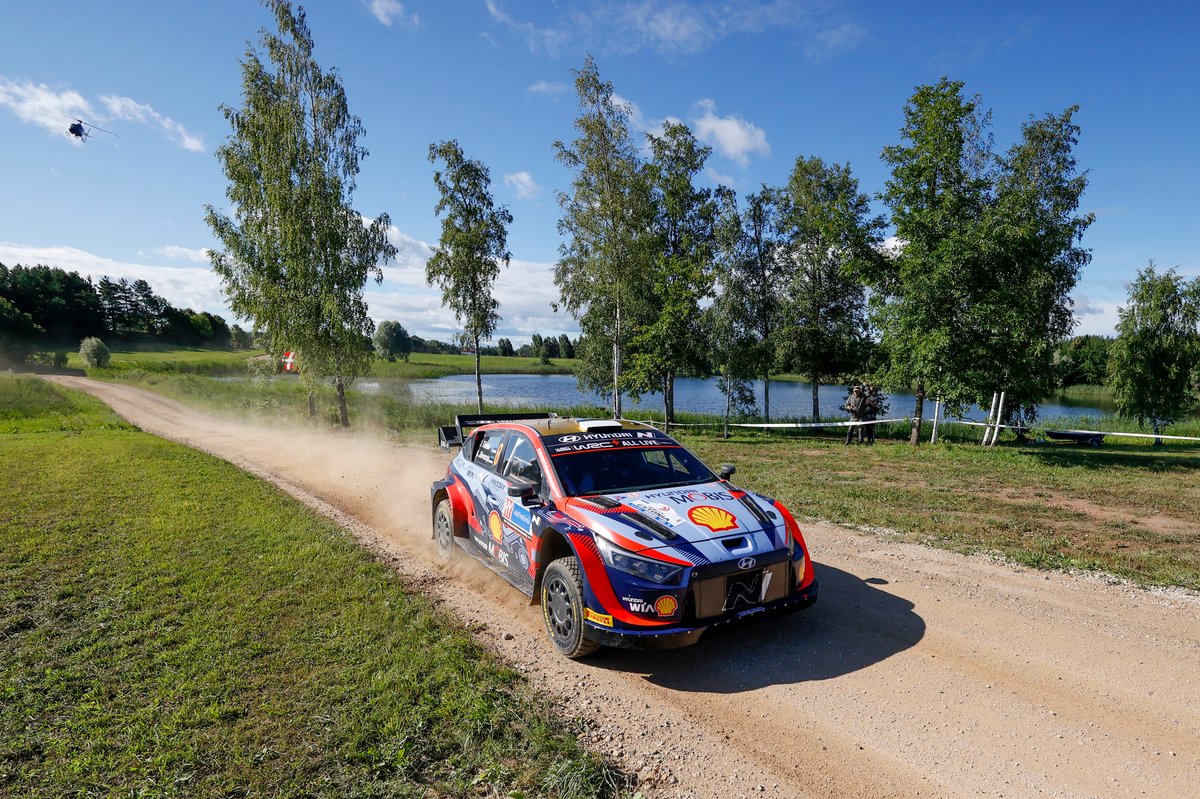 Hyundai’s Ott Tanak claimed the final place on the podium in front of his home fans, albeit some 1m55.7s adrift of Rovanpera.

The 2019 world champion held second on Friday morning before a 10s penalty for failing to run in electric mode during a EV only zone dropped him to third, but the Hyundai driver was unable to match the pace of Rovanpera and Evans.

Reliability issues stayed away from Neuville but a lack of confidence behind the wheel of an i20 N lacking grip limited the Belgian to a comfortable fourth overall, after benefiting from Esapekka Lappi’s puncture on Saturday, which dropped the Finn to seventh.

Takamoto Katsuta’s rally began with a roll in shakedown but a measured drive in tricky wet conditions at times rewarded the Japanese driver with fifth.

It proved to be another challenging rally for M-Sport Ford as Adrien Fourmaux emerged as the team’s only driver in the points in seventh after losing sixth to Lappi on the final stage. The Frenchman produced arguably his best drive of the season highlighted by a stage win on Saturday night.

Team-mate Craig Breen won the rally’s opening stage on Thursday and was firmly in contention running in fifth on Friday when he misjudged a left hander. The Irishman ran wide and hit a hidden concrete post, which broke the Puma's front suspension, ending his podium hopes.

However, the sister Pumas of Pierre-Louis Loubet and Gus Greensmith both retired on Sunday while sitting eighth and ninth. Loubet hit a rock that damaged his front suspension while Greensmith suffered transmission failure.

Loubet and Greensmith had earlier been delayed by a roll on Friday and a puncture on Saturday, respectively.

The third Hyundai of Oliver Solberg reached the finish but endured a difficult rally as the Swede initially struggled with the handling of his i20 N.

A powersteering failure caused by a run-in with a rock cost him valuable time and came on top of 3m20s of penalties for being late from service and to the start of stage 8.