Ogier secured the title with his 37th win in the WRC, drawing level with Finns Juha Kankunnen and Tommi Makinen for championship successes.

32-year-old Ogier had taken the lead of the event on Friday morning, but trailed Hyundai's Dani Sordo by the end of the first full day as the Spaniard made the most of a favourable road position on the tarmac stages to move into a 17-second lead with two stage wins in the afternoon.

Sordo added to that lead slightly on the opening couple of stages on Saturday morning in his i20 WRC, but was then reeled in by Ogier who set about hounding down the rally leader.

The Frenchman's title bid was then aided by an error from his team-mate Andreas Mikkelsen, who dramatically crashed out of third place on SS12 after clipping a barrier and rolling his Polo R WRC onto its roof.

Mikkelsen had been Ogier's nearest challenger in the championship, but his demise meant Ogier needed only to score a point to claim a fourth-successive crown.

But he didn't let up and instead pushed on, recording the fastest times on SS12, SS13 and SS14 to move back ahead of Sordo overall.

He then extended his advantage on the first running of Sunday's loop and cruised through the second to win by 15.6s and cement the title for himself and co-driver Julien Ingrassia - a year after crashing out of the rally on the final Duesaigues stage.

"It's been a tough season but it's fantastic," he said. "To be champion two rallies before the end again is great - I cannot do much more.

"There was a little bit more thinking before this stage, not to do the same as last year, but it's fantastic."

While Sordo was unable to keep pace with Ogier, he nevertheless equalled his best result of the season with second, finishing the best part of a minute clear of his Hyundai team-mates. 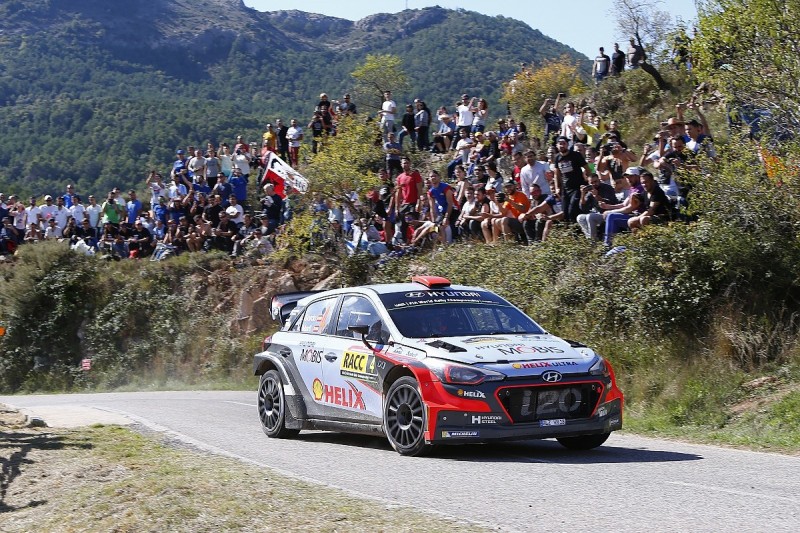 Thierry Neuville beat Hayden Paddon to the final podium spot, with Paddon securing his best result to date on a tarmac rally, as the pair ended the event separated by 12.8s.

Kris Meeke had started the final day in fifth, but retired on Sunday morning's first stage with an engine problem - bringing the Citroen driver's untidy event to a premature end.

His exit instead promoted M-Sport's Mads Ostberg to a lonely fifth, who in turn was well clear of the similar DMACK Ford Fiesta of Ott Tanak - who had won the opening stage of the rally.

Behind them, Kevin Abbring sealed his best finish in the WRC with seventh, having enjoyed a trouble-free run throughout the weekend.

Craig Breen broke his driveshaft on Saturday morning but was able to continue after making it back to service and recovered to score the final point in his Citroen DS3, finishing behind respective leading WRC2 runners Jan Kopecky and Pontus Tidemand in their works Skoda Fabia R5s.

Jari-Matti Latvala was fast all weekend in the third Volkswagen Polo R and won Sunday's powerstage, but only after he had retired from the rally on Firday afternoon after breaking his suspension in a crash before rejoining on Saturday.