Ogier took the rally lead from Lappi at the end of Saturday after the Finn made a small mistake and overshot a corner, and continued to pull out time over his team-mate across Sunday's stages.

The reigning champion could only managed the third-fastest time on the Powerstage however, while title rival Ott Tanak swept up the maximum five points.

Despite a crucial victory, the result leaves Ogier still trailing the Toyota driver by 17 points in the championship fight.

Tanak took a steady approach at the start of the weekend, a move that rewarded him with a victory in Turkey last year, but his hopes of repeating that success were dashed by an electrical issue that forced him to retire after Saturday's opening stage.

He rejoined the event under Rally2 regulations on Sunday and made the risky decision not to take any spare tyres to save as much weight as possible, but it was a choice that paid off when he won both runnings of the Marmaris stage.

Second-place finisher Lappi had battled with Jari-Matti Latvala throughout Friday morning and then held onto the lead throughout Saturday until a costly mistake passed the baton on to team-mate Ogier. 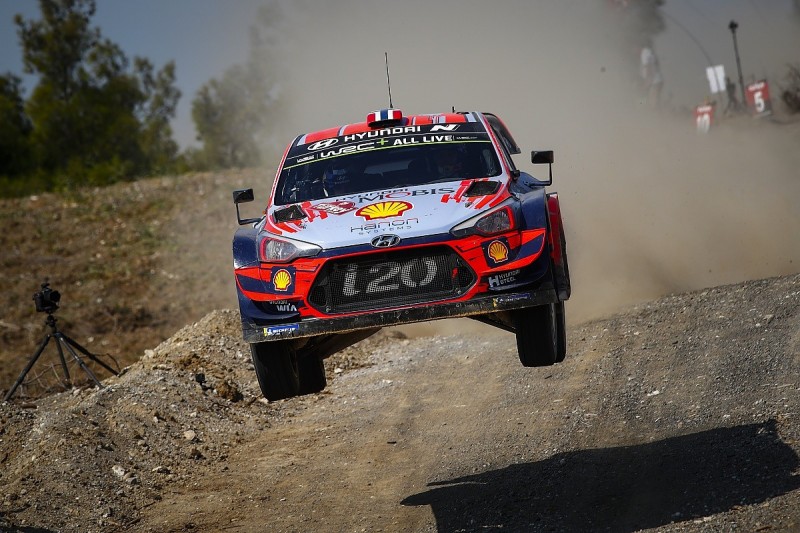 The final podium spot went to Hyundai's Andreas Mikkelsen, who had a strong weekend on the tough terrain of Turkey, with Teemu Suninen taking fourth - a further 31.1s behind.

Dani Sordo struggled with an early puncture and intermittent engine issues but a run of strong performances on Saturday enabled him to take fifth place.

After taking two stage wins on Friday morning, Latvala lost 50s with a puncture on his Yaris that afternoon, but recovered to sixth after the misfortune of his team-mate Tanak and Thierry Neuville.

Kris Meeke finished 54s behind Latvala after struggling for grip, which resulted in a number of small incidents on Saturday.

A roll for Neuville's Hyundai i20 on Saturday morning lost him four minutes and he struggled to get back into position, leaving him in eighth - which dropped him to third in the drivers' standings despite clawing back four extra points on the Powerstage.

Pontus Tidemand finished in ninth standing in for the injured Elfyn Evans at M-Sport, while WRC2 Pro winner Gus Greensmith was 10th.