Rally Sweden Historic followed the modern cars onto the stages and caused significant problems for the main WRC field on its second pass through the Friday and Saturday tests.

The historic and national cars were running narrower tyres and that, allied to the fact that most were rear-wheel drive, meant deep ruts were cut into the ice for the second run.

As first WRC driver on the road, Ogier found the situation particularly problematic and was a distant 12th by the end of Friday.

"The ruts are 20cm narrower than my car," said Ogier.

"Even in a straight line I have to fight like hell to stay on the road.

"The feeling is horrible - in every corner there is no way I can load the car and I hit virtually every snowbank. I just put my front wheels in [the ruts] like everybody else, but the rear is in 10 or 15 centimetres of loose.

In a bid to salvage something from the weekend, Ogier started the powerstage late to get better road conditions and went second-fastest, earning four bonus points.

He was given a 4m10s penalty for starting out of position, but M-Sport checked his team-mate Elfyn Evans into the final time control sufficiently late to give the Welshman a penalty that elevated Ogier back to 10th overall for another point.

Ogier emphasised he was not blaming the national crews.

"They are here to enjoy their rally, but it's so difficult with the conditions on the second pass of the stages," he said.

"It might have made a difference if we'd had a choice of tyres.

"Here we only have one tyre - it's the only event of the season where we don't have a choice.

"Even the Junior WRC cars have more choice than we do. They have two studs [a choice of 7mm or 8mm length]. That could have helped for us."

Toyota team principal Tommi Makinen, whose drivers Ott Tanak and Jari-Matti Latvala both tumbled down the order on day one, was adamant a format change is necessary.

"This needs to change," he said. "We cannot have these narrower cars doing this to the road.

"Why can't they run the national cars after the WRC has been through both times?"

Tanak was more sympathetic, saying "the national cars make it more difficult for us, but this is the rally as well".

Latvala, who also competes in historic events, argued making the historic entrants use the same size tyres as the WRC runners would solve the problem. 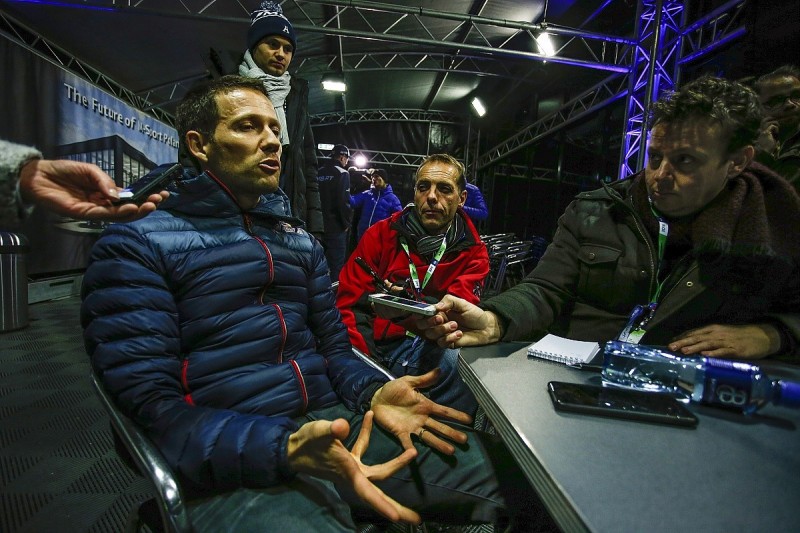 Sebastien Ogier's game was telegraphed from Friday. What's surprised me is the response to his tactical approach to the powerstage.

Unfair, unsporting and not the behaviour expected of a champion, people have said. I disagree.

I'd say this is precisely the behaviour expected of a champion.

Let's deal with the legal side of things first, shall we? The WRC's sporting regulations are clear and concise on this matter. Point 33 of the 'controls' section lays out the penalties for early and late arrival at any control of a rally (one minute for every minute or fraction of a minute early; 10 seconds for every minute late).

There's nothing restricting crews' behaviour in the area before the control begins.

For M-Sport, this was as clear a no-brainer as they come. Ogier would wait 25 minutes and run behind all the World Rally Cars on a road where the ruts from the national cars had been ironed out and any loose snow swept aside.

Had he not done that, Ogier's chances of powerstage points would have been slim to non-existent. Yes, he would have banked his single point for 10th place, but that was already part of M-Sport's calculation - sacrificing Elfyn Evans was part of the game. It was harsh on the Welshman, but such is the lot of a number two driver.

I loved listening to those berating Ogier, Julien Ingrassia and the team for what they'd done. But I also loved watching faces fall when I mentioned that I'd like to see more of this sort of thing in the future.

This is part of the game. The rules are there, use them. This is the most important rally championship in the world and at this ultimate professional level, nothing can or should be left to chance.

It fits for some to cast Ogier as the bad guy - the folk having a go last weekend were the same ones who refused to see the borderline discrimination he faced when the FIA made the championship leader (ie Ogier) run first on the road for two days.

Ogier's not the bad guy. He's the clever guy. The guy who turned one point into five on Sunday.