Sebastien Ogier dominated Rally Mexico to move back into the lead of the World Rally Championship, as Thierry Neuville gave Hyundai its maiden podium finish

Ogier beat team-mate Jari-Matti Latvala by more than a minute in a crushing one-two for Volkswagen, and his second win of the season moves him three points clear of the Finn in the title race.

Completing the podium, albeit more than five minutes slower than Ogier, was Neuville. The Belgian's Hyundai team-mate Chris Atkinson also in the points in seventh on his first event in the i20 World Rally Car.

At the front, it was a commanding performance from Ogier, who took charge of the rally when early sparring partner Mads Ostberg hit trouble on Saturday morning.

After blitzing the Saturday afternoon loop, Ogier added two more wins on Sunday - including taking maximum points on the power stage - to make it 14 victories from the event's 22 stages.

Latvala matched his team-mate on occasion throughout the weekend but was left to rue a difficult Friday during which he had to run first on the road and lost 40 seconds to Ogier. He eventually finished 1m12.6s behind the reigning champion.

When Ostberg damaged his Citroen, Mikko Hirvonen encountered a mechanical problem and Kris Meeke crashed in quick succession on Saturday, Latvala was left unopposed for second and Neuville - who had started Friday's afternoon loop down in ninth - inherited third.

The Belgian stroked his i20 home to finish on the rostrum in only the third event for the Korean firm's German-built car, and one that before the rally started it had feared would be its toughest challenge yet.

The result was nearly in jeopardy, with a water leak striking the Hyundai on the road back to the official finish in Leon, but Neuville made it safely home.

Another beneficiary of the rally's early drama was Elfyn Evans. The M-Sport driver finished a career-best fourth as he kept his Ford Fiesta RS WRC on the road while more experienced drivers - including team-mate Robert Kubica and VW's Andreas Mikkelsen - crashed out. 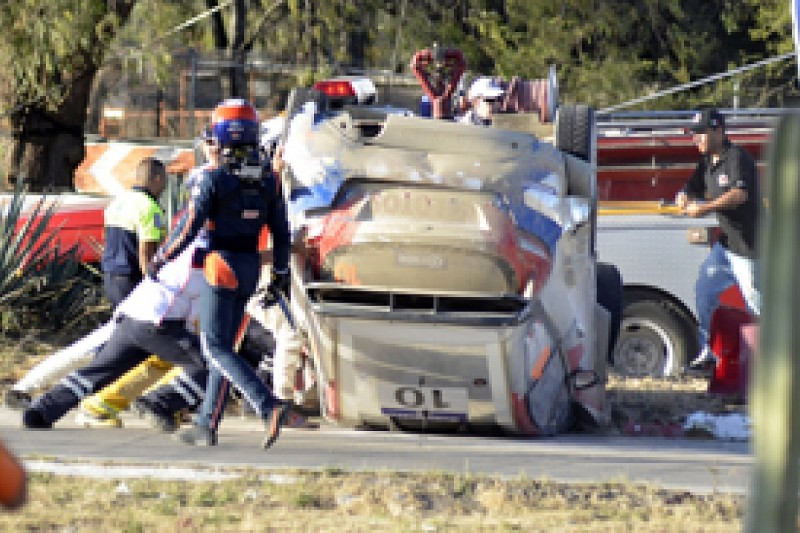 Kubica did not appear at all on Sunday, having suffered two rolls in two days and damaged the rollcage of his car, while Mikkelsen was never a serious factor having crashed early in the rally and compounded that with a roll on Saturday afternoon.

Martin Prokop and local hero Benito Guerra completed the top six, both drivers adopting a cautious strategy on the final day to make the most of their rivals' misfortune and mistakes.

Yuriy Protasov cantered to the win in the WRC2 class, despite having to contest the event's longest stage - the 55km Guanajuato leg - with a broken driveshaft.

He also made it into the overall top 10, helped by Meeke (who was running under Rally 2) crashing on the final stage.