Citroen's Mads Ostberg extended his Rally Australia lead to 6.8 seconds at the end of Friday's running as Sebastien Ogier boosted his hopes of a sixth World Rally Championship title

Ostberg held a 6.2s cushion going into the final two superspecials run back-to-back and two conservative runs were enough to extend his advantage.

The Citroen driver's growing lead was boosted by the struggling Jari-Matti Latvala, who managed to clip a bale in the his first run of the superspecial as his Toyota Yaris WRC battled understeer.

Latvala's subsequent time loss was enough to allow Craig Breen past into second overall and give Citroen a one-two lead of the rally heading into Saturday.

Breen made up two seconds on SS7 alone, which put him 0.7s clear of Latvala, and he then extended the end of day gap to 1.7s on SS8.

Tanak, an outside title contender after a puncture while leading last time out in Rally Spain, ran the final two stages of Friday in Australia with bodywork damage.

That was because Tanak clipped a fence post and had an awkward landing into water earlier in the day that worsened the Yaris's handling on the lengthy Sherwood stage.

Tanak has a comfortable buffer back to his team-mate Esapekka Lappi in sixth, 11.4s further back, after losing time when his engine ingested too much water on landing from a jump.

But Tanak's attention will be on Ogier, who is on course for a sixth title in seventh. 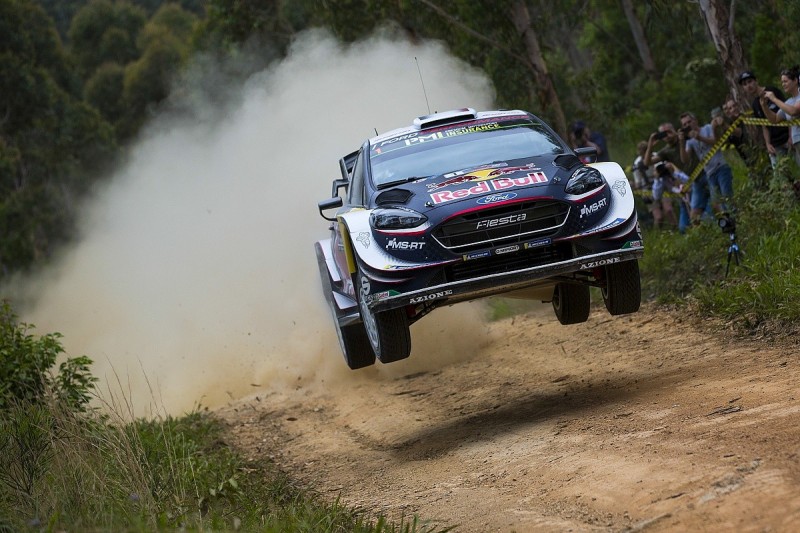 Ogier went into Rally Australia 23 points clear of Tanak, meaning his current position would be enough for the title if Tanak maintained fifth.

The Frenchman described his approach to Friday as similar to running a superspecial on every stage and M-Sport used team orders to put the five-time champion clear of Elfyn Evans and Teemu Suninen.

The Hyundai driver made a mistake on SS7 that led to him sliding into the sand bank early in his run.

While that only cost the Belgian around a second on the timesheets, he had already lost 21s after hitting a chicane and picking up a puncture early in Friday's running.

Neuville's position means Ogier would win the title by eight points if the two remain in their current overall positions.

Ogier also has the bonus of no longer running first on the road for Saturday, with Neuville in that position instead.

Andreas Mikkelsen took no part in the final two stages after his earlier incident with a tractor on stage that played a part in his day-ending roll. Hyundai said he will return under Rally2 on Saturday.

Chilean brothers Alberto and Pedro Heller lead WRC2 in their Ford Fiestas, with Alberto holding a commanding lead over his sibling after SS8.