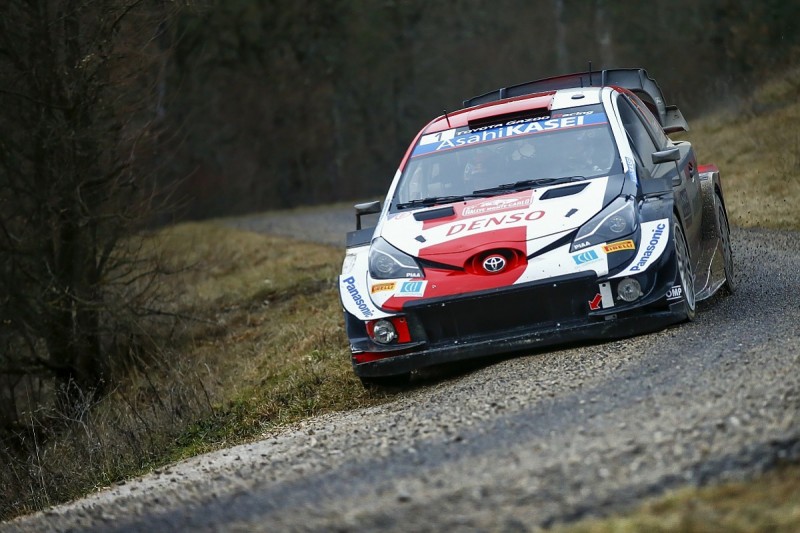 Ogier lost the lead of the World Rally Championship's season opener on the penultimate stage when the front-left tyre on his Yaris WRC punctured and cost him the best part of 35 seconds in lost time.

That promoted Hyundai's Ott Tanak up to second and handed the initiative to Ogier's Toyota team-mate Elfyn Evans, who held a 20.4 second buffer with only the run from Chalancon to Gumiane left.

However, a sensational display by seven-time champion Ogier that lit up the timing boards ensured he completed the test 16 seconds faster than Evans, and cut the deficit to 7.4 seconds in the process.

Asked what his approach would be going into day three, the Frenchman said: "I came here to win this rally and I'll do everything to make that happen. I think we have been pretty unlucky with the puncture - there is nothing you can do about that - but the conditions have been very tricky, a lot of rain, and also with the puncture we had to carry on.

"I was really pushing [in SS7] because I was really angry with the puncture. This is Monte, so anything is possible. I am here to win this rally, so I am going to win it.

"Take away the brake issue from yesterday, and the puncture, and we could be in a comfortable lead but we're not, so it means we have to keep pushing."

With the rally finely poised, and having produced four different leaders so far, Ogier insisted he would not get involved in the art of mind games with Evans, who he beat to the drivers' title last season.

"I do not need any mind games," added Ogier. "I just drive fast - that is the way we do it [win rallies]. We have good respect between each other and I think that we enjoy the fight together in the stages. And there is no leaderboard talk [team orders] for the fight."

Evans felt that Ogier's puncture was a "shame" and that his team-mate had produced a strong series of drives throughout the day.

In comparison, Evans explained that he was not happy with his own performance, and struggled to find confidence in the more extreme conditions on-track.

"Not really [pleased with my performance today] to be perfectly honest," said Evans.

"Seb has had a fantastic day; it's a shame for him that he picked up a puncture, I think the story would look a little bit different had he not had that.

"From my side I can see where the time is going; the split times coincide with where I am struggling. It is just when [the conditions] turn more extreme, more slippery, that I'm struggling for that last bit of feeling.

"I don't get the confidence that I need to push in that area but hopefully we can make a few changes and be better in those conditions tomorrow.

"I am sure he has taken a bit of risk to arrive at that point. I nearly didn't take quite enough and we know as well that there is a small advantage to run first on the road but to be fair it's not 16 seconds.

"It's maybe one, or two, or three - who knows - but he has driven very well today and has been difficult to keep up with. But we still have a job to do tomorrow and have a big fight on our hands.