Sebastien Ogier is still the driver Thierry Neuville fears most in the 2018 World Rally Championship title fight, despite Ott Tanak now being ahead of the reigning champion

Five-time champion Ogier is a further 10 points behind.

But when asked by Autosport which of his two rivals he feared most, Neuville replied: "Ogier. For me Ogier is the man to beat.

"He is the five times champion and he is strong on every event.

"In Turkey, again it was me and him fighting in the front. If you look at Ott, he was eighth in the beginning, then he was fourth and then finally he won when we both retired and Andreas [Mikkelsen] retired.

"At the end, Ogier is strong on every single event. It's really difficult to beat him."

As championship leader, Neuville will run at the front of the field through Friday's mid-Wales stages.

Traditionally, going first on the road has been the favourable position in wet and muddy conditions but the Hyundai driver is not sure that will be the case this time. 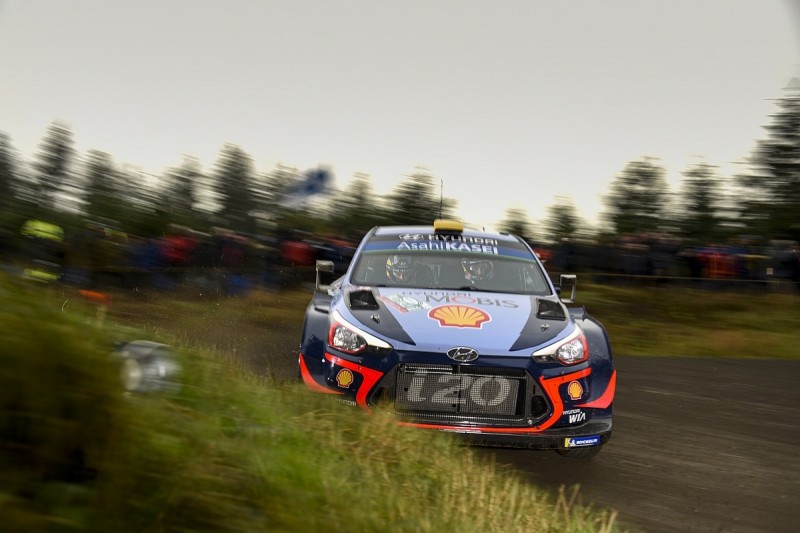 "I don't really know, because I never ran first on the road [in Wales], but I don't think the road will change so much," he said.

"I don't think it will make much difference where you are on the road. If the rain comes then maybe that will change.

"We will be fighting at the front again, I'm pretty convinced for this and the main target for this weekend is to make the gap bigger again.

"We missed an opportunity to do this in Turkey, we could have made a big step forward there.

"If the rain comes at the weekend, we will be all in the same position [because of regulations that stipulate the classification order of the factory cars are reversed in the running order on Friday night] and that's most important, to be around the same place as Ogier and Tanak.

"But hopefully we will be at the back [of the Saturday start order] because we are leading!"

Tanak's event did not get off to the best of starts as he slid wide and damaged the front of his Toyota Yaris WRC at Thursday morning's shakedown stage Clocaenog.