Opel has revealed more technical details about the E-Corsa it is durability testing, and will compete in what it believes to be the first all electric rally championship next season.

The cars will replace the Adam Cup Car currently being used in its successful ADAC Rallye Cup, the winner of which has been given a works' drive in the European Rally Championship's junior categories and over 100 drivers have competed in the category.

Autosport understands the same prize of promoting the e-Rally Cup champion into the ERC junior categories will remain when a new Adam R2 is introduced for 2021.

Opel is running a brace of test 100kW (136bhp) cars at the Dudenhofen test centre.

The rally E-Corsa utilises the same battery as the road car, with 50kW energy storage offering 209 miles of regular use or 37 miles of competition.

The ADAC Rallye Cup will be replaced by the e-Rally Cup, which will run a 'super season' starting in summer 2020 running through 2021. The events will be similar to its previous iteration, supporting the German Rally Championship alongside some standalone events,

"Both cars are covering as many miles as possible in order to gather the maximum amount of data at an early stage.

"There is no experience of an electric rally car that we could turn to, so initially we had to rely on calculations and simulations.
"These are being gradually replaced with real data.

"Other focuses are on loads and temperature management of the battery, as well as adapting the software.

"I am pleased to report our programme is going smoothly." 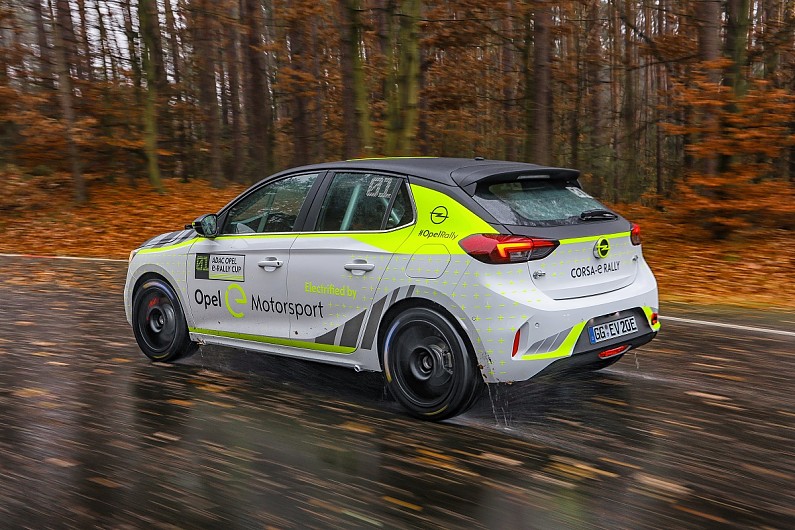 Schrott said the firm would switch its attention to performance running next month - with the aim of exceeding the e-Rally Cup's predecessor.

He added: "With a brand cup car, it is important that the performance remains constant and accessible under all conditions.

"The equipment should guarantee equal opportunity for all participants.

"We also decided that the Corsa-e Rally should match or even exceed the high standards of its petrol-engine predecessor, the Opel ADAM Cup.

"We are on the right road here too. While the power output is almost the same, the 260Nm of torque is much higher than the ADAM Cup's.

"The centre of gravity is low, thanks to the underfloor-mounted battery and the weight distribution is also very good, which is extremely important for an agile competition car.

"Now we need to find the most balanced chassis setup, so in January we will start simulating some real rally stages."

Entries opened for the ADAC Opel e-Rally Cup earlier this month, with 15 cars available in the series which starts in July. The car is expected to cost under €50,000.