Meeke regained a podium spot he had lost overnight from a 10 second penalty, passing Dani Sordo for fourth place after El Condor and then moving into third place and 5.2s ahead of Ogier after Mina Clavero.

His 10s penalty arose over a shortcut used on Saturday morning by the Northern Irishman, his team-mate Ott Tanak and WRC2 Pro leader Mads Ostberg on SS11, where the trio had deviated from the roadbook and gone around a gate instead of through it.

Hyundai duo Neuville and Andreas Mikkelsen are likely out of reach at the front, with Neuville taking an unexpected stage win on Mina Clavero after going only seventh fastest on El Condor beforehand. 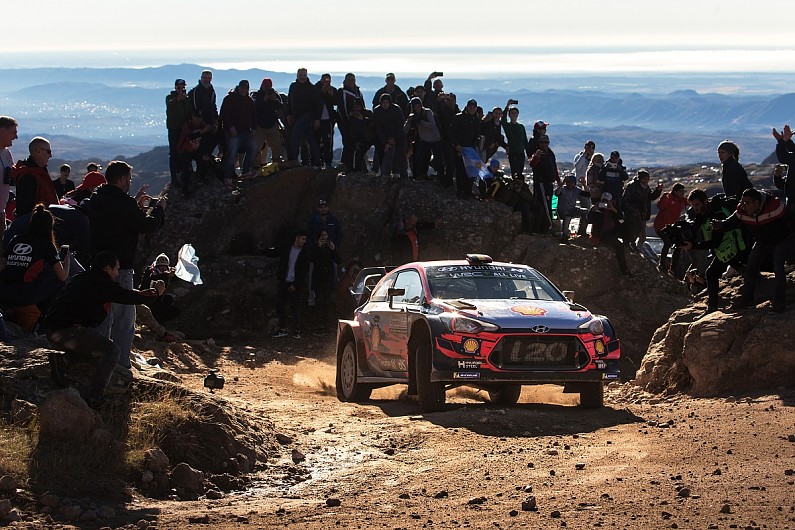 The current championship leader has 40.2s in hand over Mikkelsen, who in turn has a 24.1s advantage over the charging Meeke.

However, Meeke complained at the end of the Mina Clavero that his steering was occasionally locking. There is no service between SS17 and the powerstage.

Sordo fell even further back as he struggled for grip on both stages, dropping behind Jari-Matti Latvala into sixth place. With one stage remaining, Latvala is only 0.7s ahead of the third Hyundai in fifth.

M-Sport's Teemu Suninen is a lonely seventh, over three minutes behind Sordo.

Ostberg is now under pressure from Tanak, who fell out of the lead battle on Saturday due to an electrical issue with his Toyota Yaris WRC that forced him to retire.

Two minutes had separated the pair heading into Sunday's trio of stages but Tanak has now closed the gap to 35.8s.

Tanak took 38.2s out of Ostberg on the first pass of El Condor, which also acts as the powerstage finale, though the Citroen driver had complained of a broken intercom affecting his pace.