Sebastien Ogier held off the pursuing Thierry Neuville on Saturday afternoon's loop of Monte Carlo Rally stages, ceding only one second across two stages to the Hyundai driver.

Ogier had taken a pair of softer compound tyres in comparison to Neuville but the effect was negligible, as he dropped 1.2s during Agnieres en Devoluy-Corps then gained 0.2s back one stage later.

Neuville claimed he had left pace in reserve after the first of those stages on which he had beaten Ogier but admitted he had no answer for Ogier on the second.

Follow the final Monte Carlo Rally stages as they happen with Autosport Live from 7.15am UK time on Sunday

Toyota driver Ott Tanak was the star of Saturday, guiding his Toyota Yaris to a lockout of wins across the day's four stages.

Having lost time on Friday when he was forced to stop and change a puncture, Tanak went for a risky tyre strategy on Saturday afternoon, selecting four non-studded winter tyres while the rest of the field had taken studded tyres more suited to icy conditions.

Tanak's gamble was a masterstroke, taking almost 20s out of podium rivals Sebastien Loeb and Jari-Matti Latvala across two stages - most of which was recouped on the first, icier test. 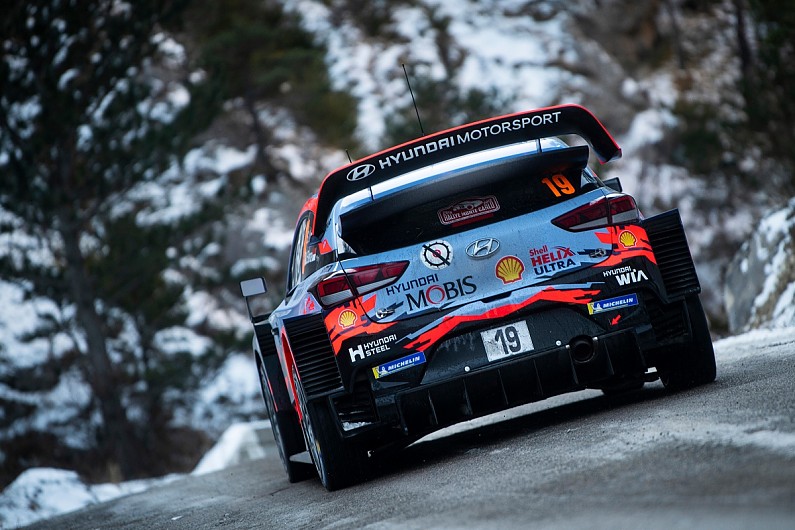 New Hyundai signing Loeb retook third place from Latvala on the afternoon's first stage and finished the day with 2.3s in hand over the lead Toyota. But Tanak is now firmly in podium contention, 17.3s off Loeb and 15s off team-mate Latvala.

Kris Meeke was consistently second fastest in the last of the three Toyotas in the classification, holding a lonely sixth while most often being the closest to Tanak's stage-winning pace.

M-Sport pair Teemu Suninen and Pontus Tidemand are still well outside the top 10 but both will still score manufacturers' points for their team.

WRC2 Pro leader Gus Greensmith is instead the best-placed M-Sport driver in seventh, although he is ineligible to score manufacturer points as he races an R5-specification car and thus is not considered a WRC entrant.

Greensmith was being caught by French asphalt ace Yoann Bonato but a puncture for the Citroen C3 R5 pilot cost him more than a minute.