Hyundai Motorsport driver Thierry Neuville says he and Hyundai are "more hungry" for title success in the World Rally Championship, after its spate of near-misses.

Neuville has finished second to Sebastien Ogier in the past three seasons, and took the battle down to the final event in Australia last year.

Hyundai, meanwhile, missed out on the manufacturer' crown to Ogier's M-Sport team in 2017 and to Toyota last season, prompting the marque to change its manager.

"We are [aiming for the title], every year [we are] gaining experience which is really helpful." Neuville said at the WRC's official launch at the Autosport International Show.

"I think we have learned a lot in a couple of years, especially last year as well as a team to be very aggressive throughout the season.

"I think it was a nice year fighting for the championship until the very last race which is really enjoyable but very intense as well.

"Together as a team we have grown, we smelt the title but we didn't get it at the end so it makes us even more hungry for the upcoming season."

Neuville insisted he won't be changing his approach when the WRC season gets underway in Monte-Carlo, despite falling short across the past few years.

"Probably the approach will be pretty similar," he admitted.

"We need to be consistent throughout the season which we really were last year. 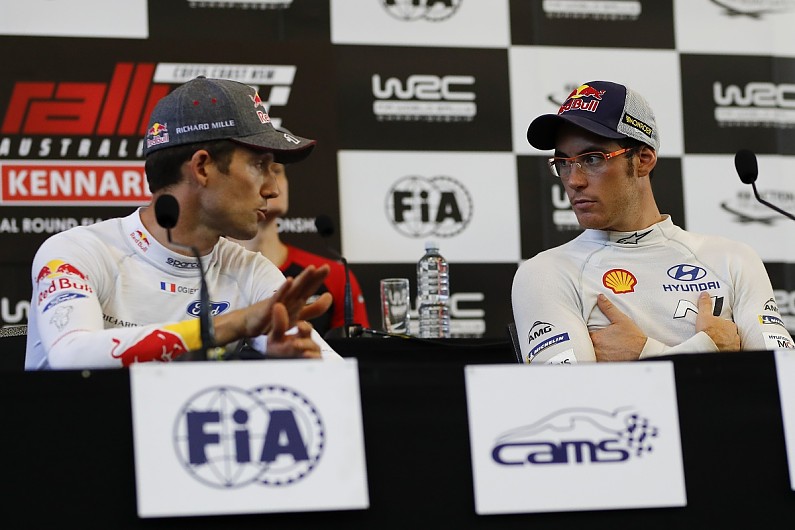 "But as we said as a driver, as a crew and with my team-mates as well we have pushed really hard in Hyundai Motorsport to push for changes in the upcoming season to be even more strong as a team and that's what we can see now.

"We are really looking forward and excited about maybe to start a new chapter."

"We go with a lot of motivation towards the first event.

Neuville pointed to the contribution of team-mates Andreas Mikkelsen, Dani Sordo and new recruit Sebastien Loeb as vital to his and Hyundai's hopes of taking both titles.

"Obviously for the manufacturers' title we need all the drivers to be strong on every event," he said.

"For the drivers' title of course hopefully I can be in a similar position as last year and if necessary be helped by my team-mates.

"That's what actually gave Ogier the chance to take the title last year so we are going to look forward to this year and see what's going on."