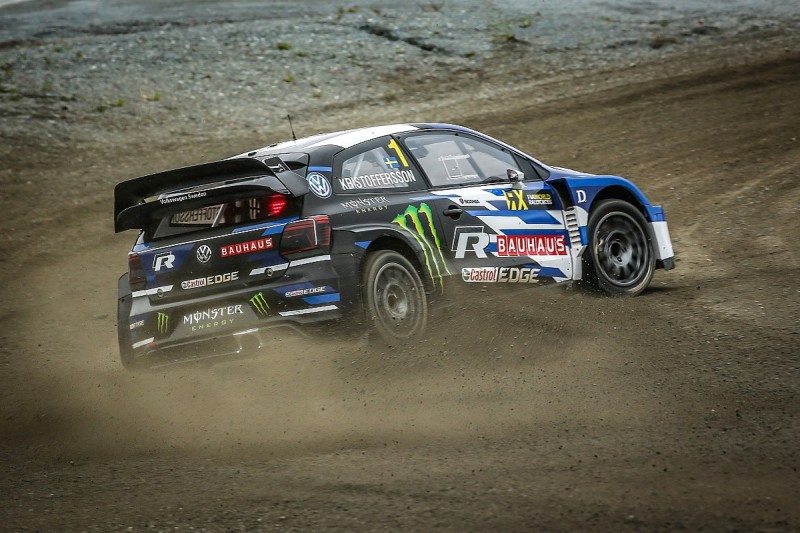 The Volkswagen PSRX driver set the fastest time in each of the four qualifying sessions before winning semi-final one and the final from the front to take maximum points and further extend his advantage at the top of the table to 31 points.

Mattias Ekstrom made it into the semi-finals by the skin of his teeth, after he was given a five-second penalty for contact with Petter Solberg for the second time this season, at the joker lap entry in Q3.

He then failed to move more than a few meters from the start line in Q4, his Audi S1 suffering a mechanical problem.

But, the Swede qualified 10th and climbed from the back row of the semi-final two grid to be second at Turn 1 and secure a second-row start for the final.

As the lights went green in the main event, Ekstrom drew alongside front-row starter Timmy Hansen and dived straight into the joker at the first opportunity.

Peugeot driver Hansen was turned sideways by slight contact from Ekstrom to his left at Turn 1, forcing him into the path of his team-mate Andreas Bakkerud, while Solberg climbed to second behind Kristoffersson.

From there on, the Volkswagens ran line astern at the front for the first four laps, until Solberg dropped behind a hard charging-Ekstrom after taking a lap five joker.

Kristoffersson saved his compulsory extra-route until the final tour, where he remained in front of compatriot Ekstrom to score victory.

Solberg finished third at his home round, while Kevin Hansen equaled his personal best World RX result in fourth having started on the front row of semi-final two alongside his brother, Timmy.

Timmy Hansen and Bakkerud completed the final in fifth and sixth, while Sebastien Loeb's run of podiums was ended by not making the final.

The Frenchman and Peugeot lost ground in Hell when he failed to take his joker lap in Q3 and was dumped to the bottom of the session's results.

He finished fourth in semi-final one, but still holds second in the championship ahead of Solberg.

WRX Hell: Kristoffersson dominates for Volkswagen on day one